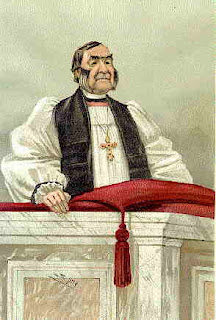 A timely rerun (given the Pope's continued and willful error regarding Anglican Holy Orders):

Archbishop Frederick Temple is not known as an original theologian or scholar. In fact, Frederick Temple is probably best known as the father of a future Archbishop of Canterbury, William Temple. However, one extremely important event occurred in 1896 while Frederick was Primate of all England: The Church of Rome, in the person of Pope Leo XIII in his bull Apostolicae Curae, declared the Holy Orders of Anglicanism--the Orders that had been bestowed upon the likes of Lancelot Andrewes, William Laud, Samuel Seabury, and John Wesley--"utterly null and void." This declaration was based upon the assumption that the revised Ordinal prepared by Archbishop Thomas Cranmer in 1549 was defective.

One of the objections made to the Anglican Ordinal was that the language used was insufficient in the making of bishops. The words of the Anglican Consecration rite were "Take ye the Holy Ghost, and remember that thou stir up the grace of God, which is in thee by imposition of hands" while the Roman Pontifical simply states "receive the Holy Ghost." If Anglican bishops are not to be accounted as properly raised to the episcopate, neither then are the Popes of Rome by the same standard so applied. Pope Leo XIII also objected that the Anglican priests were not instructed by the Ordinal to offer the Mass for the quick and the dead; instead they are told to preach the Word and administer the Sacraments. As the instruction pertaining to the Sacrifice of the Mass was only added to the Roman Ordinal in the 11th Century, again it must be stated that if Anglican priests are not properly priests then neither were any of the presbyters of Western Christendom.

Other spurious arguments were made by various Roman authorities against Anglican Orders, much of the same caliber as those already mentioned. Some of the arguments pertained to the vestments worn or posture taken by the priest during Holy Communion. One other objection was that Anglicanism itself lacked a full understanding of the Eucharist as sacrifice. Indeed, the Church of England had rejected, both in her liturgy and in the 39 Articles, the notion that each Mass offered Christ as a new Sacrifice to the Father. Instead, in its liturgical theology it chose to emphasize the teaching of Saint Augustine of Hippo: 'If you wish to understand the body of Christ, listen to the words of the Apostle: "You are the body and the members of Christ." If you are the body and the members of Christ, it is your mystery which is placed on the Lord's Table; it is your mystery you receive. It is to that which you are to answer "Amen," and by that response you make your assent. You hear the words "the body of Christ," you answer "Amen." Be a member of Christ, so that the "Amen" may be true.' This sentiment is echoed in Cranmer's Prayer of Oblation (which follows the reception of the Bread and Cup in the English Rite):

"And here we offer and present unto thee, O Lord, ourselves, our souls and bodies, to be a reasonable, holy, and living sacrifice unto thee; humbly beseeching thee, that we, and all partakers of the Holy Communion, may be filled with thy grace and heavenly benediction, and be made one body with him, that we may dwell in us and we in him."

This is the Eucharistic theology prayed through the Anglican liturgy. When Frederick Temple, as Archbishop of Canterbury, and the Archbishop of York responded to Leo concerning this important issue, they did so via a letter directed to "the whole body of Bishops of the Catholic Church."'We make provision with the greatest reverence for the consecration of the holy eucharist, and commit it only to properly ordained priests and to no other ministers of the church. Further, we truly teach the doctrine of eucharistic sacrifice, and do not believe it to be "a bare commemoration of the sacrifice of the cross," an opinion which seems to be attributed to us (by Roman Catholics). But we think it sufficient in the liturgy which we use in celebrating the holy eucharist--while lifting up our hearts to the Lord, and when now consecrating the gifts already offered that they may become to us the Body and Blood of the Lord Jesus Christ--to signify the sacrifice which is offered at the point of the service in such terms as these. . . .[F]irst we offer the sacrifice of praise and thanksgiving; then next we plead and represent before the Father the sacrifice of the cross, and by it we confidently entreat remission of sins and all other benefits of the Lord's passion for all the whole church; and lastly we offer the sacrifice of ourselves to the creator of all things which we have already signified by the oblations of his creatures. The whole action, in which the people has necessarily to take part, we are accustomed to call the eucharistic sacrifice.'This is the eucharistic theology of St. Augustine, enshrined in The Book of Common Prayer and taught by the Anglican divines of the Reformation, the Restoration, and beyond.
Posted by Rev. Dr. Hassert at 4:12 PM

I much prefer ancient ecclessiology to Roman, which generally emphasizes real-world history and broad principles, rather than technical "touching rules." Indeed, for the undivided Church of antiquity (until Cyprian), the question of orders is simply (1) whether Anglicans (or any group) is an unbroken organic institutional offspring from the Church at Pentecost (regardless of hyper technical, largely medieval procedural rules of succession)and (2) whether it now confesses authentic Christianity.

The answer to the first is obvious. Regardless what procedurul rules of succession you apply (and those mostly human traditions), the English Church (Ecclesia Anglicana) is an unbroken and organic offspring of the first, undivided Christian Churc.

The answer to the second wold be debatable among Orthodox perhaps, especially in light of our poor disciplinary history and extreme tolerance of diverse theological views, but I believe that the Formulative, Constitutive pronouncements and documents that historically signify and define Anglicanism are simply the same as those of the Primitive and Ancient Church.

Hence, its is not surprising that, back in the 1930s, when the question of Anglican Orders was taken up by many Orthodox, a much more affirmative response tended to expressed than that of Rome.

Sad that the Orthodox later went with a minority report position; a minority rejected Anglican Orders, and the larger group took up that position in practice as well. The earlier documents are importent though, for they express honest theology rather than a working out of a priori assumptions as with the Roman position.

I suspect a lot of the de facto acceptence of the "minority report" in contemporary Orthodoxy is largely caused by recent Episcopagan and Canterbogus nonsense. And, Orthodoxy simply hasn't got the time to strain the the Alphabet Soup of "extramural" Anglicanism to throw us Anglo-Traditionalists a bone.

The major difference between Roman ecclesiology and that of the wider catholic Church is that Rome forgives herself of those faults of which she finds herself unable to forgive others. Rome is unable to hold herself to the stadards to which she holds others because her performance is and has been like that of the current Episcopal Church.

What has struck me most about this latest proclamation from the Vatican is to what purpose? It really does not add, change or better define the position of the RCC. And, the careful reiteration of what constitutes a church and what constitutes an ecclesial body looks like the launching point of something. Could that be a revisiting of Leo XIII's position in "light" of new evidence? I suspect there is keen interest on the part of the Holy See to see orthodox, catholic practice in the West gathered to it--and, a reversal of sorts on this for those provinces and jurisdictions which have not followed the innovations of the last four decades may be occupying more than a few cardinals and monsignors. Does anyone else sense that "Madame protesteth too much" in this new proclamation?

There also seems to be a forced tone of moderation of late in the EWTN broadcasts I've heard when Anglicans are mentioned. It certainly contrasts with the rabid dismissals of six to ten months ago. Does that signal a rapprochement of sorts?

Yeah, ++Frederick and ++William blew 'Apostolicae Curae' out of the water with 'Saepius Officio'. And they did it better Latin, by all accounts. So Anglicans win on both counts. Too bad our position has been weakened by 'liberal' policies over the last half-century.