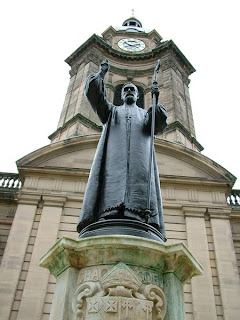 Indeed, in the Byzantine tradition, the priest often begins his homily with the salutation, "Christ is in our midst," to which the people answer, "He is and ever shall be." And this, before the consecration.

I am always saddened when an Anglo-Catholic wants to know whether the reserved sacrament is kept in a church before he decides to whether to genuflect before the altar or to reverently lower his voice, as if the consecration of the church building and its altar as special spaces set aside for the worship of Almighty God is not in itself a sufficient reason for adopting a reverent attitude regardless whether the reserved sacrament is present.

I am saddened even more when certain Evangelicals refuse to adopt a reverent attitude in church at all, not even during the service itself, as if the notion of consecrated space (that which is set apart) is just some sort of Roman Catholic superstition or innovation.

Moses was once commanded to strike a rock, another time to speak to the rock. He obeyed the first, time, but disobeyed the second time, preferring to act in accordance with his own experience rather than in obedience to the will of God. Exodus 17:6; Numbers 20:7-12. The Apostle Paul tells us that that Rock was Christ. Corinthians I 10:4. To adore Him is to obey Him. Ecclesiastes 12:13.

In the case of Moses, to obey is to strike or speak as directed by God. In our case, to obey is to eat and drink. I would think that any words, gestures or postures of our devising constitute adoration only to the extent that they facilitate that which He has specifically commanded.

As to Death Bredon's comment about evangelicals who refuse to show any kind of reverence for the Lord's Supper or it's elements, I admit I have been one of those myself. At some point, I came to think that something more was required of me, but I wasn't sure what to do. Idolatry was a real concern for me. Some of those fears were relieved when I remembered that Israelites would bow before the Ark of the Covenant with divine approval. Joshua 7:6. Likewise, the Psalmist tells us to "worship toward His holy hill". Psalm 5:7, 138:2. So I think I can show proper reverence for holy objects without committing idolatry.

In my own strange history of coming to the Lord, I knew that I was to bow to things which represented Him and His Lordship and Divinity, I never properly noticed the scripturess which the Welshmann quoted. But I have now made note of them and will use them with others.