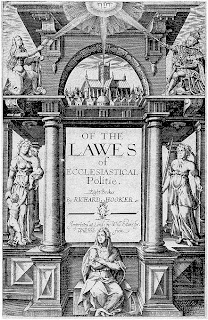 Richard Hooker on Baptism and Predestination

From Book V of the Ecclesiastical Polity

There are those who elevate too highly a simple and immediate means of new life by relying solely on the singular idea of predestination and subordinating those means without which we are not actually brought to enjoy what God secretly intended. It is but a self-deceiving vanity to trust in god’s election to us if we do not keep ourselves in the paths that God appointed for us to walk in. When the Apostles saw that men were called to participation of Jesus Christ after they had embraced the gospel of God and received the Sacrament of life, he was not reluctant to count them among the number of elected saints (Ephesians 1:5, 5:8). At that point, he considered them to be delivered from death and fully purged from all sin. Until that time, since only God knew of their predestination to eternal life, the Apostles had to count them, as they did other people, altogether alien, without hope, strangers, utterly without God in the present world (Ephesians 2:3, 12).
It is by means of the Sacraments and other visible tokens of grace that we are able to know that He, whose mercy granted us in this life the means to eternal life, long ago intended us to that end to which these tokens lead. Let us never think it safe to presume our predestination to life eternal by mere conjectures about God’s intention and purpose without attention to the means to that end.
Predestination does not bring us to life without the grace of an actual calling of us – which implies Baptism (Romans 8:30). Even as we are not men by nature without human birth, so neither are we Christians in the eyes of God’s Chruch without a new birth. We are not newborn, according to the ususal course of divine ordinance, except by Baptism, which declares us to be Christians. We rightly declare Baptism to be the door of our entrance into God’s house, the first apparent beginning of our ne wlife, the sign, perhaps, of the grace of our earlier election, and the first step in our sanctification (St. Basil, De Spiritu Sancto, ch. 10). Thomas Cartwright oversimplifies the matter when he says, “He who is not a Christian before he came to receive Baptism cannot be made a Christian b Baptism,” which, he says, “is only a seal of the grace received earlier from God.” (Reply, 1.iii, p. 134).There were some old Valentian heretics who were so enamoured of human knowledge that they ascribed everything to it, while despising the Sacraments. The believed that our ignoranc had made us subject to every misery, and oru redemption and restoration depended entirely on knowledge (Irenaeus, Adversus omnes haereses, 1.18). Those who fix their minds on the necessity of faith and suppose that nothing eles is required to attain grace come very close to this error (Tertullian, De baptismo, ch. 13: Bernard of Clairvaux, 1090-1153, Epistle 70, Ad Hugonem).Yet it is a kind of faith to say that Sacraments are in their own way n less necessary than faith itself. When our Lord and Saviour promised eternal life, was this any different from His promise of restored health to Naaman the Syrian, which He made with the condition: “Wash and be clean” (2 Kings 5:13); or when He restored health to those bitten b serpents by having them look at a bronze serpent (Numbers 21:8)?
If Christ Himself, who gave us salvation, requires Baptism, it is not for us who seek salvation to annoy and press Him as to whether unbaptized people may be saved. Rather we should studiously do what is required, or run the risk of danger that may come from failing to do so (Mark 16:16; Hugh of St-Victor, De sacramentis, 1.9.4). Had Christ merely declared His will to have everyone baptized and not given us any reason why this was necessary, our ignorance of His rationale might have dampened our eagerness to obey Him. Now that we have been taught that Baptism is necessary to remove sin, how are we showing our love of God if we do not use every possible means to deliver souls from sin through Baptism? Even the Pelagians, who completely denied original sin and, in that respect, any need for Baptism, nevertheless baptized infants and acknowledged the Sacrament as necessary for entrance into the kingdom of God (Eusebius Gallicanus, Homilia V. de Pascha; Homiliae ad populum, fol. 46).
Posted by Rev. Dr. Hassert at 9:31 PM

Thanks for the post. This is an especially tough subject to understand for those like me coming from a Baptist and free-church background. Commentary like Hooker's really helps to fill in the gaps and answer the lingering questions.

On the general subject of folks who are uncomfortable with the language of baptismal regeneration, or who, like me, struggle to reconcile election with sacramental efficacy, it occurs to me that supposed difficulty is maybe of our own devising. Strictly speaking, I don't "know" that I'm one of the elect. I trust that I am, and I believe that there is a biblical sense of assurance that is given to the elect. So even though I don't "know" that I am one of the elect, I count myself among the elect, without apparent contradiction. Shouldn't I, for similar reasons, count all the baptized among the elect, even though I admit I don't "know" whether each baptized Christian is in fact elect?

It sounded better in my head than when I wrote it out, but I don't think I can clarify without a much longer post.

As always, thank you for your ministry.