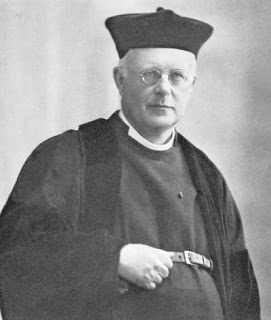 Moss looks very old fashioned in his priest's gown and square cap, both of which remind me of the Rev'd Herbert Conley going through the streets of Cushing, Oklahoma about his priest work.

The one place in which I think Moss may err is in seeing Elizabeth's poem as medieval theology. If it does it reflects the work of the schoolmen before the definition of transsubstanciation. It does not seek an answer as to how the bread and wine become our Lord's body and blood but only assert that it was the work of His word. It is still the work of His word as was the making and sustaining of all creation.