A note from this blogger: To all that is written below I say a hearty "Amen!" However, it must be noted that within the membership or partnership (full and otherwise) of Common Cause there is a great deal of "diversity," to the point that it may simply end in fracture. The REC and the APA use the historic Prayer Books of 1662 and 1928, while almost all of the other groups use the 1979 American Prayer Book--something no APA or REC bishop would allow in their jurisdictions. Also, there is the 800 pound gorilla standing in the corner--the issue of the ordination of women to the priesthood. Bishop Minns of CANA has recently stated that he will press on for the ordination of women in order to maintain the "two integrities" that were present in the Episcopal Church (language that makes me shudder. . . this is the language of TEC/ECUSA, not the language of historic Anglican theology). There can be no true common cause without Common Prayer and catholic order; if these are lacking the whole endeavor will be in jeopardy.
From the Common Cause website:
http://www.united-anglicans.org/
Theological Statement
We believe and confess Jesus Christ to be the Way, the Truth, and the Life: no one comes to the Father but by Him. Therefore, the Common Cause Partnership identifies the following seven elements as characteristic of the Anglican Way, and essential for membership:
We confess the canonical books of the Old and New Testaments to be the inspired Word of God, containing all things necessary for salvation, and to be the final authority and unchangeable standard for Christian faith and life.
We confess Baptism and the Supper of the Lord to be Sacraments ordained by Christ Himself in the Gospel, and thus to be ministered with unfailing use of His words of institution and of the elements ordained by Him.
We confess the godly historic Episcopate as an inherent part of the apostolic faith and practice, and therefore as integral to the fullness and unity of the Body of Christ.
We confess as proved by most certain warrants of Holy Scripture the historic faith of the undivided church as declared in the three Catholic Creeds: the Apostles', the Nicene, and the Athanasian.
Concerning the seven Councils of the undivided Church, we affirm the teaching of the first four Councils and the Christological clarifications of the fifth, sixth and seventh Councils, in so far as they are agreeable to the Holy Scriptures.
We receive The Book of Common Prayer as set forth by the Church of England in 1662, together with the Ordinal attached to the same, as a standard for Anglican doctrine and discipline, and, with the Books which preceded it, as the standard for the Anglican tradition of worship.
We receive the Thirty-Nine Articles of Religion of 1562, taken in their literal and grammatical sense, as expressing the Anglican response to certain doctrinal issues controverted at that time, and as expressing the fundamental principles of authentic Anglican belief. In all these things, the Common Cause Partnership is determined by the help of God to hold and maintain as the Anglican Way has received them the doctrine, discipline and worship of Christ.
"The Anglican Communion," Archbishop Geoffrey Fisher wrote, "has no peculiar thought, practice, creed or confession of its own. It has only the Catholic Faith of the ancient Catholic Church, as preserved in the Catholic Creeds and maintained in the Catholic and Apostolic constitution of Christ's Church from the beginning." It may licitly teach as necessary for salvation nothing but what is read in the Holy Scriptures as God's Word written or may be proved thereby. It therefore embraces and affirms such teachings of the ancient Fathers and Councils of the Church as are agreeable to the Scriptures, and thus to be counted apostolic. The Church has no authority to innovate: it is obliged continually, and particularly in times of renewal or reformation, to return to "the faith once delivered to the saints."
To be an Anglican, then, is not to embrace a distinct version of Christianity, but a distinct way of being a "Mere Christian," at the same time evangelical, apostolic, catholic, reformed, and Spirit-filled.
Posted by Rev. Dr. Hassert at 9:51 AM 10 comments: 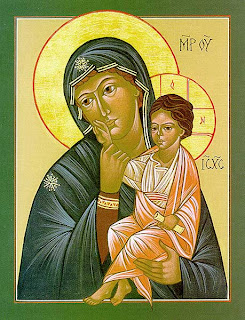 A blessed Christmas!
In the beginning was the Word, and the Word was with God, and the Word was God. The same was in the beginning with God. All things were made by Him, and without Him was not anything made that was made. In Him was life, and that life was the Light of men. And the Light shineth in darkness, and the darkness comprehended it not. There was a man sent from God, whose name was John. The same came as a witness to bear witness of the Light, that all men through him might believe. He was not that Light, but was sent to bear witness of that Light. That was the true Light which lighteth every man that cometh into the world. He was in the world, and the world was made by Him, and the world knew Him not. He came unto His own, and His own received Him not. But as many as received Him, to them gave He power to become the sons of God, even to those who believe in His name, who were born not of blood, nor of the will of the flesh, nor of the will of man, but of God. And the Word was made flesh, and dwelt among us (and we beheld His glory, the glory as of the only Begotten of the Father), full of grace and truth.
Posted by Rev. Dr. Hassert at 10:02 AM 3 comments: