Article II of the Articles of Religion 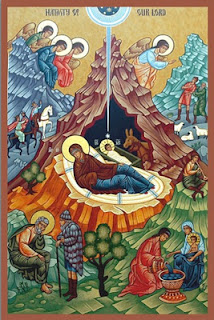 Article II of the Articles of Religion:
The Son, which is the Word of the Father, begotten from everlasting of the Father, the very and eternal God, and of one substance with the Father, took Man's nature in the womb of the blessed Virgin, of her substance: so that two whole and perfect Natures, that is to say, the Godhead and Manhood, were joined together in one Person, never to be divided, whereof is one Christ, very God, and very Man; who truly suffered, was crucified, dead, and buried, to reconcile his Father to us, and to be a sacrifice, not only for original guilt, but also for actual sins of men.
Posted by Rev. Dr. Hassert at 4:23 PM 2 comments:

What I am about to say may offend many, especially if they have strong feelings on the topics about which I am to write. However, these are my own controversial thoughts, so I thought I’d share them in the appropriate place for such things—the blogosphere.

I was invited to celebrate the Holy Eucharist last week at a parish (different from my own, obviously) and I inquired of the rector as to what the parish was used to: What service did the parish use? Did the priest face the people (facing west, facing altar and people) or the altar (facing east) during the Eucharist? What did the priest usually wear? When did the priest do this, that, or the other? I thought these were important questions, because I wanted to provide the people of the parish with a service as close as possible to the service they were used to. It turned out that there were many differences that I had to contend with (none of them controversial, to my mind). The service used was the 1928 Book of Common Prayer (which I am quite used to, but our parish uses the 1662, so I needed to remind myself of the differences). The priest faced the altar (east facing celebration) when celebrating the Eucharist (something I’m quite used to, but our parish faces the people, so once again I needed to remind myself of the differences and where and when to do what). One priest of the church usually wore a chasuble, the other alb and stole (I usually wear surplice and stole at my home parish, so to be consistent I wore an alb, stole, and chasuble).  A few other little differences: The church used a short service booklet that called the service “The Mass,” but the text of the service itself was directly from the 1928 Prayer Book (was I celebrating "The Mass" or "the Holy Communion"? To my mind they were and are the same, given the text was identical to the 1928 Prayer Book); during the Creed the altar servers only stayed bowed during the mention of the incarnation itself, whereas at my home parish we stayed bowed until “He rose again”; when the offering was received the priest usually made the sign of the cross over the offering plate (the altar server politely reminded me to do it when I was handed the plate) which we don’t do at my home parish; when handing me the cruets the server seemed confused when I made the sign of the cross over the wine and water—something we do at my home parish but that they didn’t seem to do at their parish. Little things. Things that altar servers notice (and need to notice to get used to the priest), but not things usually noticed from the pew.

What is my point of pointing out these little differences? First and foremost is this: None of them bother me. None of them are really all that important to me. To me they are things indifferent.  Adiaphora. Anglicanus whateverus. I have faced East. I have faced West. I would stand at the “north end” of the Holy Table if asked to. There are good reasons for doing any of the three, and if I were asked to celebrate in a parish I would ask: Which way does your priest usually face when celebrating the Eucharist. I just don’t care all that much as to what direction I am facing, for I’m sure God can hear me and the people.

As to what to wear? I have worn a surplice and stole. I have worn alb, stole, and chasuble. I would wear surplice and tippet if asked to. . .or surplice, tippet, and cope. My main concern is that I look like a priest of the historic Anglican Church and that the parish can tell I’m a priest, rather than a judge or an academic (or a visiting Prebyterian minister). If someone asked me to wear a pulpit gown I would insist on it being white, with a tippet or stole and a clerical collar underneath. I don’t care all that much for the debates over vestments: They are symbolic. If people think they change the substance of the rite I would have to tell them that they’re wrong. The most important symbolism was and is the white garment of the minister; this is the most ancient piece of Christian clerical garb and symbolic of baptismal purity. It was originally what we now know as the alb, but the surplice is a derivation of the alb, so I can’t get too emotional about wearing one or the other. Some people insist that to be “really Catholic” you need to wear a chasuble, but Anglican priests have celebrated the Eucharist in a surplice and tippet or stole for hundreds of years and I have seen Roman Catholic priests celebrate a weekday Eucharist in surplice and stole, so I can’t get all that emotional about that either. Some will say that it is wrong to celebrate in a cope (as Anglican bishops and priests used to do in cathedrals and collegiate churches), because the cope is not “a sacrificial garment,” but one has only to trace the history of the cope and chasuble to see that they are derived from the same garment (so either both are sacrificial or neither of them are). Also, if one looks at the Eucharistic vestments of the Eastern rites we see chasubles that look very much like copes (again, not much of a shock since they are derived from the same source).

I have been an Anglican for several decades, and I have seen many different types of churchmanship. I have seen “high Masses” and simple said Eucharists, grand cathedrals and plain chapels, priests in simple surplices and stoles and ornate chasubles. What really matters to me is that I’m celebrating a service from an orthodox Prayer Book (or a close derivation thereof, such as An Anglican Prayer Book), preaching a coherent and orthodox sermon, and that the service is done “decently and in order.” In most instances this means doing what the people are familiar with so as not to harm the consciences of those in the parish.

The parish might be critiqued as being “too high” or “too low.” Erroneously, it is often assumed or explicitly stated that if a parish lacks the use of incense, a large central crucifix (in contrast to a cross without a corpus or with a Risen Christ), or perhaps a statue of the Blessed Virgin, it is not a “Catholic parish.” Conversely, it is assumed that if these things are not present the parish is “protestant,” which is then assumed to be “anti-Catholic.”

Again and again, I find myself coming back to Bishop Cosin’s admonition that Anglicanism is to be “protestant and reformed according to the principles of the ancient Catholic Church.”

What then makes the parish a Catholic parish?

Also, what is the primary service of worship in the parish church? If there is a priest to be had, then the Prayer Book assumes that the service will be Holy Communion. Indeed, it may be preceded by Morning Prayer, but any casual observer of the 1662 Book of Common Prayer will be able to see that the Epistles and Gospels laid out for the year are for the service of Holy Communion: This is the only service of worship appointed by the Savior “for the remembrance of” Him. If the parish wishes to keep the “Morning Prayer tradition” alive, it should do so by preceding the Eucharist with Morning Prayer, not replacing the Eucharist with Morning Prayer. In the celebration of the Holy Eucharist, is the text of the Prayer Book followed for the prayer of consecration, or is it replaced by something else? Again, while the Prayer Book may be supplemented, it ought not be supplanted or else we are no longer following the Anglicanism of old, but "doing a new thing."

If the Eucharist is the primary focus of corporate Sunday morning worship, is it being celebrated decently and in order, with reverence? Is the priest decently appareled in a manner of vesture traditionally accepted in the Anglican Church? The rubrics of the 1928 Prayer Book of the Church of England assume that the priest is to wear either a surplice and stole or an alb and chasuble or cope (this is defensible in that both the chasuble and cope derived from the same ancient vestment).

A “pulpit robe,” a suit and tie, or some other novel manner of dress is not the traditional “uniform” of an Anglican priest for the celebration of the Holy Eucharist. The celebrant is a priest in the Church, not simply an individual performing a task. A surplice with stole or alb and vestment are the normal modes of apparel for the Anglican priest, and ones that place the emphasis on the office of the priest and not the whims of taste of the individual filling that office.

Questions of incense, statuary, and ornaments are largely superficial questions in determining whether a parish is “Catholic.” It is a Catholic parish in the Anglican Way if it keeps the Lord’s Day as the Church Catholic has always done from ancient times, with the celebration of the Holy Eucharist, in which we receive the Body and Blood of Christ with and under the signs of Bread and Wine. If a parish is not living up to this Anglican ideal as set forth in the Prayer Book, then it is right for people to “protest” and be rightly “protestant” in the manner in which Bp. Cosin describes. However, quarrels over other things will usually result in discord and discontent with both clergy and laity focusing on minor elements of the service instead of the corporate sacrifice of praise and thanksgiving performed in union with the rest of the Body of Christ.