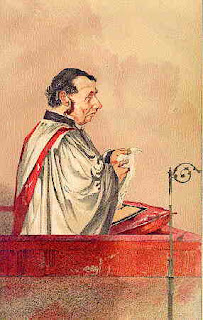 Last week parts of the Anglican world were shaken slightly by the publication of an article purported to be by the Rev. Dr. J. I. Packer, a prominent Anglican theologian and supporter of many traditional Anglican causes. The title of the article was "Anglicanism: Protestant or Catholic?" The article was not by Packer and was fairly simplistic in its analysis of the question. However, some valid points were made about the use of the various Missals within Anglicanism. Numerous Anglo-Catholic authors (Bishop Gore and C.B. Moss among them) have made the same point: The only true Missal of the Church of England is the Book of Common Prayer.

The pseudo-Packer article's main point, that Anglicanism is wholly "protestant" is, as I said, extremely simplistic. However, so too is the contention among some that the term "protestant" doesn't even apply to Anglicanism. If asked if we Anglicans are Protestant or Catholic some will say: "We are Catholic, but not Roman--we are not Protestants." This is simplistic and historically erroneous, and any layperson with an interest in reading would soon find very Catholic sounding Churchmen of the 16th and 17th centuries embracing the term Protestant. But my rector said it wasn't so! What to make of it then? Is we are using today's terminology perhaps "Protestant" isn't wholly accurate, but neither would be the use of the term "Catholic," for in today's use of the term this means Roman. Many Anglicans are happy to explain the historic and correct use of the term "Catholic" but do not wish to do so with the term "Protestant." This is a selective use of logic--if the historic usage of one term is explained the other term ought to be likewise explained. "You see, you misunderstand the term Catholic dear friend. . ." The follow up should be they also misunderstand the historic use of the term Protestant.

To put it more concisely: "At the Reformation the Church of England became protestant in order to become more truly and perfectly Catholic." William Van Mildert, Bishop of Durham 1826-36.

Let me turn to the good Father Moss for a fuller explanation (from Answer Me This):
"Remember, “Catholic” means universal. Strictly speaking, only those doctrines and practices are Catholic which have always been believed and used in all parts of the Church. More loosely, the word is applied to practices and traditions (such as the observance of Christmas Day or the use of special dress by the clergy) which have a long continuous history and are universally accepted, even though they do not go back to apostolic times. The word also implies “orthodoxy,” holding the right faith and worshiping God in the right manner as required by the Church."

In answer to the question: Is the Anglican Church Catholic or Protestant? Moss replies
"Both; it is Catholic positively and Protestant negatively. It is Catholic in its essential nature because it maintains the Catholic and apostolic faith and order. It is Protestant, in the old sense, negatively because it rejects the papal claims to supremacy, infallibility, and universal jurisdiction, and the decrees of the Councils of Trent and the Vatican."

When one is confused as to the use of these terms, they ought to be clearly explained. Some will argue (as Moss actually does) that the term Protestant has changed so much that we should omit its use all together (many Lutherans argue likewise, in that the old use of the term Protestant only referred to Anglicans, Lutherans, and Presbyterians; since now it refers so loosely to almost anyone it is meaningless). However, the same could be said of the term "Catholic," since almost everyone means Roman when they say "Catholic." In my opinion we should follow the language of the Anglican divines, using both terms correctly and explaining the meaning in a clear manner to avoid confusion.

Is Anglicanism Protestant or Catholic? It is both, in the best sense of both terms.
Posted by Rev. Dr. Hassert at 12:02 PM

We need a man like Bill Van Mildert again.

Stephanie said...
This comment has been removed by the author.
8:07 AM

I would submit that the word 'protestant' is never used in the classical prayer books before the title page of the first American one in 1789. Its original use which meant merely non-Roman was positive and not negative, but the moment that the language or our usage changed and it came to mean, as it presently does, 'non-Catholic' it makes real communication with people inside and outside the Church all but impossible. It is also used to justify a claim that systematic abuse of the classical Anglican formularies is actually obedient usage.
I realise that it is really very unfair of us to expect people to be functionally literate, but one of the curses of intelligence is to realize that we cannot always control language or the meanings which others assign to it especially over a period of four hundred years and more. The prayer book never asks us to believe in protestantism but it does require that we, individually and collectively, believe in the Catholic Church. That alone should settle the matter.

But when asked by what we Anglicans mean by the word Catholic, we are likely to open up the whole question again. In our age Catholic is used often simply to denote proximity to Rome--the Anglicans and Lutherans are "more Catholic" because on Sunday we look more like the Romans; for better or worse this is how people continue to employ the term. The weight on our shoulders is still explaining what our best divines meant by joining the terms "protestant" and "catholic" together. My point continues to be that simply describing Anglicanism as "Catholic, but not Roman" is of little use if we cannot also describe and explain why there was an English Reformation (and a Reformation in general) or explain why men such as Cosin and Andrewes described their church proudly as "The English Protestant Catholic Church."

Good point. Let us not forget that men such as Abp. Bramhall were not ashamed to use the title "English Protestant". ( This is the name he uses in his debates with De La Militiere, the Roman polemicist, to distinguish faithful English churchmen from dissenters.

<< The prayer book never asks us to believe in protestantism >>

Unless one reads the 39 Articles of Religion, among others.

Words like "Catholic" and "Protestant" and "Reformed," or even compound terms such a "Via Media" so loaded and subject to varying shades of meaning in conventional contemporary use, that my once and future blog attempted to employ terms such a "Patristic," and "Orthodox-Catholic" and "Undivided Church" or "pre-Hildebrand." Though these words are no clearer in meaning to the average bloke, I do think they have the virtue of causing us to focus on the authentic purpose of the English Reformation -- that is an aspiration for the Authentic and Ancient Faith, not anything Continental or Contemporary. Unfashionable I know, but the epitome to true Anglicanism.

Domwalk: What others? And where in the Articles themselves do they describe the beliefs there stated as "protestant?" Finally, the Articles in their Latin original were only offered to clergy for their assent before ordination and upon taking a new benefice. But what they were supposed to teach from the pulpit was described in the canon of 1571 and the word there used was "Catholic."

The Greek roots of the word "Catholic" mean according to the whole and have nothing to do with the Church of Rome or its bishop. That Rome has been propagandist and dishonest enough to make them so credits their intelligence and their guile because if any institution is less than "according to the whole" it is the papacy whose authority once extended not so far North as Milan or so far South as Bari But we seem to think it impolite to tell people so. That is an attitude which we have never been able to afford and we have suffered for adoping it.

On the other hand, 'protestant' today means Baptists, Pentecostals, the mega churches and your local community non-denomination group so unless you are willing to give a twenty hour lecture of how language twisted out from under us, you might as well give it up. Lifetime Anglicans don't understand it and outsiders certainly won't and don't. But they can understand what they see in offices and eucharist properly celebrated. There, the action of the Church will speak louder and more clearly than attempting to deal with a linguistic battle lost at the time James II assended the English throne.

Certainly there was Reformation in England but the baby was made clean and saved. On the continent there was a revolution and nothing was saved or understood in the way in which the Church had understood it from the time of the apostles. Even the use and understanding of Holy Scripture had to take a backseat to the hatred for anything connected to historical Christianity. We are less responsible for explaining what the divines of the 16th or 17th said than we are for saying to our contemporaries what they meant in words that will not confuse our listeners and even some of our fellow churchmen.

Well done and well said! Thanks

I was always told by my first vicar that the word protestant was never used by the Anglican Church in a religious sense. It was used and accepted as a means of objecting to the political interference of the papacy in Elizabeth's reign. This was the meaning when used by S.Charles the Martyr, I was assured.

In the reign of Dutch William, that monarch asked the High Church dominated Synod to use the word in its documents as a sop to the Dutch Calvinists and was sharply rebuked by that body. (1690s,)

I have struggled for some time to explain clearly the differences between the terms Anglican and Protestant. Thank you for your comments- they have all helped me to develop a better understanding of the topic in question.