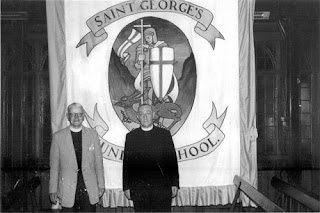 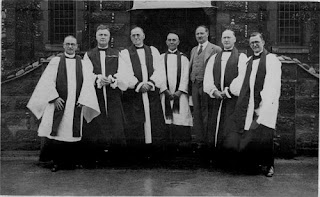 http://www.stgeorgesblackburn.org.uk/
"We are a family church, with members from babies to 90+ years! Everyone is warmly welcomed, whether they attend weekly or occasionally. We do not have o 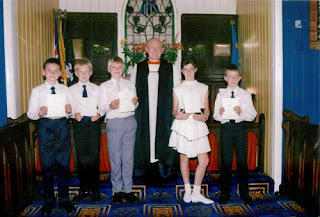 ur own places, or special rules to follow and all opinions and ideas are valued.
We believe that this is why our church has grown. Families can come together, knowing their children are welcome, even if they do make a noise!
We are obviously biased, but don't take our word for it - come and see for yourself! Our most recent members have all said how welcome they feel and how much love they feel from the Fellowship of everyone at St. George's.

Theological Education in the Anglican Way.

Cranmer Theological House exists for one purpose and mission: to continue in the Reformed Episcopal tradition of success, now over a century old, in training orthodox clergy for service in the Church of Jesus Christ. As one of three seminaries and schools of ministry under the auspices of the Reformed Episcopal Church (organized in 1873), CTH draws on a wealth of experience in the spiritual formation and theological education of both ordained ministers and lay leaders. 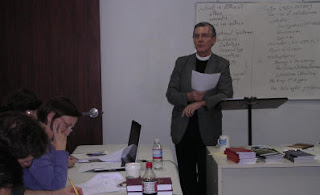 We are distinguished by our strong commitment to the Holy Scriptures as God’s infallible Word, our adherence to the theology of the English Reformation as expressed in the historic Thirty-nine Articles of Religion, and our commitment to the worship and polity of the greater Anglican tradition.
We strive to produce Biblically grounded, orthodox, and successful priests who are excellent pastors and exceptional preachers. This emphasis is reflected in the heavy concentration in Scripture, pastoral theology, and homiletic instruction. We are also committed to the equipping of lay leaders for Kingdom work.
http://www.cranmerhouse.org/

Sorry about the infrequent postings. . .

I plan to have something posted next week on Richard Hooker's consideration of Baptism and Predestination. Please do check back: I hope everyone is having a restful summer.

The Future of the traditional Anglicanism in America

I'd like to make some observations as well. As I've noted in the past, I don't like following what is happening in global Anglicanism, instead urging a return of modern Anglicans to the foundations of their faith (the Scriptures, the Creeds, the historic Prayer Books, the writings of the Anglican divines, etc). Not that I do not care about what is happening in ECUSA (or "The Episcopal Church," or whatever moniker it wishes to adopt), only that I tire of hearing people express the belief that Canterbury will come to its senses and somehow bring the "official" American church back in line with something that resembles historic Christianity.

That being said, there are parallels with the emergence of the REC, the emergence of the "Continuum" of the 1970s, and the emergence of AMiA and like-minded recent groups. First off, all of these groups sought to "continue" something in the face of beliefs or practices they found to be objectionable. Within the REC the motivating factors that resulted in the break with PECUSA were 1) a debate about baptismal regeneration (in previous posts I've argued that this was a debate in which both groups were wrong in certain ways and argued past one another); 2) a debate about ecumenicism, with a growing Anglo-Catholic element in PECUSA drawing back from relations with traditional Protestant groups; 3) elements of Anglo-Catholic practice that many evangelical and traditional high churchmen found too close to Roman Catholic doctrine (purgatory, transubstantiation, use of various Missals that approximated the Roman Mass, etc) and at odds with the English Reformation documents and Prayer Book. So, Bishop Cummins departed and Cheney was consecrated in the first major Anglican schism in America. A declaration of principles reasserting some tenets of the English Reformation were drawn up (nothing that you can't find in the writings of Hooker--so far all well and good). However, there was no huge leap of evangelical from PECUSA into the REC. As the article linked to above suggests, perhaps by the time the schism occured the momentum for growth had passed; many who may have agreed with Cummins and Cheney probably stayed in their comfortable pews.

In time the Reformed Episcopal Church seemed quite unsure of what it wanted to be. It originally wanted to be an umbrella for evangelicals of all stripes, united around biblical liturgical worship; indeed this is still an attraction of many to Anglicanism today. However, what was the Anglicanism that the REC wanted to continue? Was it a via media between the errors of Puritan and Papist alike? In time the REC seemed to present something less than the Anglicanism of Richard Hooker or John Jewel. A new list of "Articles" were drawn up that seemed a hodge podge of different emphases that tended to have no continuity with the 39 Articles of the historic Church of England. One of the failures to draw other Anglicans into the new movement after its emergence may have been this discontinuity with traditional Anglicanism. It has often been said jokingly that the REC were a bunch of Presbyterians with Prayer Books--this might be said to be an offense against Presbyterians, in that much of their theology was more high church than that of the REC. It wasn't until the last 15 to 20 years that the Reformed Episcopal Church made a concerted effort to reclaim both the Articles of the English Reformation and the Prayer Book of 1662 in their entirety as the basis for doctrine and worship. With this reclamation both growth and ecumenical relations with other Anglican groups has been possible. The Reformed Episcopal Church needed to move past simply being an "anti-Anglo-Catholic" body and move towards being a positive expression of historic Anglicanism. As an Anglo-Catholic in the REC, I can saw that I am thankful that she exists as a solid group dedicated to classical Anglicanism.

How does this history parallel the movements of the 1970s and today? Well, each exodus from ECUSA has tended to be based upon a negative searching for a positive. The REC could not sustain itself on being a body reacting against another--it needed a positive focus, but meandered until it came back to its roots of continuing the goals of the historic Anglican Reformation. When the continuing movement of the 1970s left ECUSA it was largely over liberalism, the ordination of women, and the overthrow of the Cranmerian-Laudian Prayer Book (replaced with a feel good Vatican II hodge podge). However, most leaving ECUSA at the time were Anglo-Catholics, leaving many low-churchmen to feel that this new movement was not for them (the United Episcopal Church was begun as a "continuing church" with a low-church emphasis, serving as a haven for those uncomfortable with the Anglo-Catholicism of other groups). The Articles have been consistently downplayed in parts of the Continuum, the Prayer Book largely supplanted by a Missal, and in many places the theology is very close to the Roman Catholicism of Vatican I. Growth and intra-Anglican outreach has only occurred as a result of centering the Anglican identity around the Articles and the Prayer Book: the recent full communion between the Anglican Province of America and the Reformed Episcopal Church is a good example of this trend. In other places intra-Anglican agreement has been reached by largely rejecting the Reformation and downplaying the Articles to the point of irrelevance--the recent full communion between the Anglican Catholic Church and the United Episcopal Church is an example of such a trend. The United Episcopal Church once had more in common with the REC, being a low-church body stating that it held firm to the Articles as a "defense against man's efforts to alter the Truth" (I'm paraphrasing from their website content several years back). Now the Articles are mentioned as a historic footnote and communion has been reached with a body that has done likewise. The parallel here with the REC is a reworking of Anglicanism into something new, something lacking historical continuity with the original body. In this case Anglicanism is now simply an Anglo-Catholicism closer to Rome than to Orthodoxy or the Anglican divines of the 16th and 17th centuries. Such a decision has a tendency to result in isolation from other Anglican groups, with movement closer to Rome in theology and practice. Indeed, the "via media" is now not seen by such groups as between extremes in error, but simply as a pair of helping hands reaching between Protestantism and Rome.

What of the recent movement? Most will recognize that it is a reaction against the ordination of homosexual men to the priesthood and their consecration to the episcopate. This was the final straw that broke the back of most now deciding that a new network of parishes is the answer to the current problems. However, what will the new movement center around that is positive? Most in this movement were raised within a church where the "new" Prayer Book of the 1970s was the norm, where abortion was largely tolerated, where women's ordination was not much of a question, and where distinctly Anglican theology was not taught. In the early days of AMiA parish web sites would describe infant baptism as a "dedication ceremony" and even now few parishes use the historic editions of the Book of Common Prayer, relying instead on the 1979 Prayer Book or the work of a parish liturgist to piece together services from various sources. The new groups daily emerging from the Episcopal Church seem to be following the same trend--they have had little contact with historic Anglicanism, that which served as the mainstay of worship and doctrine for hundreds of years. Instead they are emerging from a church where "the Prayer Book" bares only the same title as the work of Archbishop Cranmer, where orthodoxy itself has been watered down to a minimum. What to continue? What does this term "Anglican" even mean? It seems they too are slowly moving (back) towards historic Anglicanism. Father McGlynn has it quite right in many respects. For the flourishing of traditional Anglicanism to take place it must find its voice, not in negations but in affirmations. I believe that the center of this affirmative foundation is to be found in the Scriptures, the Creeds, the historic doctrines of the English Reformation, the Articles, and the orthodox worship handed down to us over hundreds of years.
Posted by Rev. Dr. Hassert at 6:29 PM 9 comments: