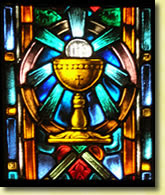 More wisdom from the good Father Moss, Answer Me This, 1959

Thanks for these posts. The only quibble I have with this one is something I have generally observed in Anglican circles: we say that we do not define or seek to penetrate the mystery of our Lord's presence in the Blessed Sacrament, yet, with Moss, many go on to Insist that the substance of bread and wine remain in the Sacrament. (I am familiar with some of the arguments here, but a little less dogmatism would be nice). And Moss adds that it is "in my opinion wiser to think in terms of power than of presence." I believe that it is wise to have informed opinions about the meaning of "Real Presence." My opinion is that Moss's opinion (that the best way to think about the Presence is not so much in terms of "presence" [!]) is not wise. But I appreciate his tone.

Moss, like so many of the Anglo-Catholics (and I don't mean 'Anglo-papists) of his time did a fantastic job of making the theology of the prayer book and of the early church assessible to any who could read. But he was not full of the spirit of rebellion, but of obedience and sanctification which meant in practise that he was ignored for the theology of the penny pamphlets at Westminister cathedral of which Bishop Gore complained.

The split unfortunately is still with us, but my great hope is that between this blog and that of The Patristic Anglican a great deal of the faith of the English church as expressed in the classical prayer books and the Articles can be made known to a great many more.

I was lucky to have found Moss at an early age and have read and re-read him ever since.

I am embarrassed to admit that I do not have CB's "Q&A" wisdom. Any tips or leads?

I too would quibbleabout CB's insistence on 8/9am Holy Communion and Fasting Communion. I believe that Dearmer demonstrated that fasting communion was/is a development of medieval piety that too easily becomes a superstition of counter-productive devotion in modern times. At any rate its a quibble and anyone that wants can read Dearmer and Moss's respective arguments and draw their own conclusions.

Dear AC,
Thank you for posting this selection from Moss's "catechism" for want of a better word. It is interesting that one of the leading RC apologists has pinched his title.

Andrew's post above seems harsh. Perhaps he should reread Moss's section on the Roman innovation of Trans-substantiation (which Moss quite correctly categorises as not the actual teaching of the Magisterium). Rome got herself painted into a corner trying to explain the unexplainable. She doesn't have the stool leg of scripture for it, nor does she have the leg of tradition, and as Dugmore explains in "Eucharistic Doctrine in England from Hooker to Waterland" (SPCK, 1942) reason evades her argument. Moss is simply calling "a spade a spade" and exposing this as the gnostic (little "g")--and thus presumptuous--theory it truly is.

A note on the early "Parish Eucharist" seems in order. It seems the Bishop of Salisbury (cf. Dearmer's Parson's Handbook, 6th ed) suggested the 9-9:30 Holy Communion as a solution to the problem of getting the young folk to church before bicycling parties which were quite fashionable in late Victorian times. It also allowed a sufficiently late time for working people to get rest before heading to their dominical duty. And, it wasn't so late that the usual 8AM Holy Communion crowd would be disgruntled. Mattins at 8 or 8:30AM was suggested followed by the Litany before the Holy Communion. The earlier Eucharist was also meant to prevent the practice of the "non-communicating" Mass which had taken hold in many Anglo-Catholic/Papalist parishes at the time and was deemed entirely foreign to a healthy spiritual life.

The Alcuin Club embraced the mid-morning celebration as an explanation of it is reprinted in their pamphlet of leaflets "The Parish Eucharist" issued in l940.

So, practical matters seem to have inspired this more than a desire to promote Communion fasting (although this is noted to be laudable where practised in both Dearmer's work and in the Alcuin Club monograph).