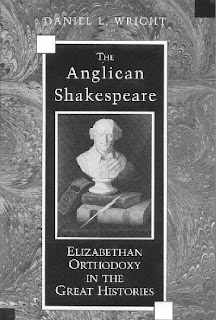 The Anglican Shakespeare
by Daniel L. Wright
"Professor Wright's demonstration of the Anglican stance of the writer who called himself Shakespeare--a stance that made Shakespeare, through the history plays, an invaluable Reformation apologist and propagandist for the Crown."
I have to admit first off that I have not read this work--it was published more than a decade ago and I just happened upon it looking for another book on the internet. That being said, I was very happy just to see the title. From time to time I watch EWTN (the Roman Catholic Cable Network started by Mother Angelica), and for the last 10 years or so I've seen writer after writer coming on tauting a new book which declares that the Bard was (oh my goodness!) a closet member of the Church of Rome. What great evidence do these writers provide? I kid you not, but here were two that I recall: "Shakespeare has many of his characters kneeling to pray, and as you know, Protestants don't kneel," or "The very fact that they were praying suggests that they were (Roman) Catholic, because the doctrine of predestination in Calvinism would have made prayer superfluous." I sat with my jaw resting on the floor when I listened to these comments--these writers seemed to know near to nothing about Anglican theology, except that Anglicans were not Roman Catholic. Therefore, the Church of England and its theology was simplified exponentially and the result was (drum roll please) Shakespeare must have been a Roman. You may notice many writers from the Church of Rome doing the same thing now with C.S. Lewis. . .where will it end?
As a related aside, on EWTN years back I watched coverage of John Paul II's visit to predominantly Orthodox lands. Many of the Orthodox bishops and priests held up signs that said "Pope go home." The EWTN commentators and reporters were at a loss--they didn't understand it at all, because they saw Orthodoxy and Rome as nearly identical, except that the Orthodox didn't recognize the Pope as the head of the Church. Again, gross oversimplifications resulted in a complete misunderstanding of the actual situation. These commentators must have read (almost) nothing of the theological and historical differences between East and West from the Orthodox perspective. I wrote a letter to EWTN asking if they'd consider having a practicing Orthodox or Anglican theologian or cleric on to their station to address such oversimplified presentations of non-Roman Catholic Christian bodies. About a year later I received a short reply stating that my suggestion would be taken into consideration.
Posted by Rev. Dr. Hassert at 4:49 PM

I enjoy watching EWTN, though I am not a Catholic. "The Journey Home," about people, often clergy, who have converted to Catholicism, is fascinating, and often helpful.

Some of the "history" has an interesting slant, to say the least. I think of EWTN as the "Pius XII Network." It is not clear if they have ever heard of Vatican II, but if they have, they don't like it. ;)

EWTN presents a very one-sided view of the Roman church. They completely ignore the more centerist and left-leaning side of the church as though it doesn't exist.

I have found it interesting that C.S.Lewis is the darling of both the traditional Romand Catholic party (EWTN/Relevant Radio/Ave Maria Radio) and our local evangelical Protestants. No one seems to give more than a passing comment to the fact that he was a staunch, decided Anglican. Very odd. Just as this business with Shakespeare is odd. However, the thing I find most annoying at present is the treatment of the English Bible as presented to the world in the Authorised Version. The Romans insist that our Bible is not "catholic" as it doesn't contain the deuterocanonical books which of course it does and which were ordered by law to be printed in it. The truth of course lies in the great fear the Roman Church has had since the 16th century that its greatest possible challenger in the West is classic Anglicanism.

d. bunker is so precisely right. The funny thing is that the parish in which I worship is very, Very classically Anglican and a family leaving the Episcopal Church looking for a new church home found it too Catholic and Too Roman. We later learned that they had once been Roman Catholic.