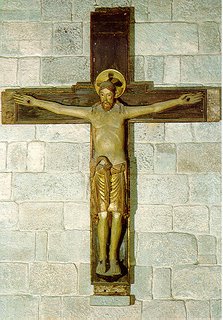 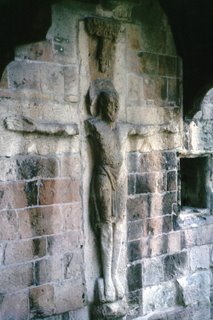 From the Oxford Dictionary of Christian Art:

An ". . .important point about the two early representations (of the crucifixion) is that the figure of Christ is standing against, rather than hanging from, the cross. He wears only a loin-cloth and is fastened by four nails, but is triumphing over death rather than dying. This emphasis on victory, not on agonizing death, is characteristic of all the earliest representations, as Christus Triumphans."
Posted by Rev. Dr. Hassert at 3:19 PM

Christ OUR Passover [our passing over death in him], is sacrificed for us. . . . . Therefore, let us JOYFULLY keep the feast.

One of the reasons I have loved the art of the church is for the enduring value of its wholesome testimony. We no longer know whether the sermons preached in this place were orthodox or heretical, but the art is still preaching life and victory through Jesus Christ.

Washington National Cathedral is a modern case in point. The priests are unfaitfhul, the bishop does not know Christ, and Islamists stand in the pulpit - but the building itself, through its art, bears testimony against them.

May we may recover the gift of art and beauty!

Indeed, the importance of Aesthetics in the Christian life should be regarded as moral issue. To deny this is to militate against the goodness of creation and the sacramental principle, since the Imago Dei, thanks be to God, was not designed to live by discursive knowledge alone.

Leaving aside the plastic arts, Benedict XVI once remarked that Christendom's greatest composers-i.e. Machaut, DePrez, Ockeghem, Palestrina, Bach, etc- are the New Testament's most profound expositors. It is hard to disagree with him when you listen to a work like the St. Matthew Passion or the B minor Mass.

Yes, this is good. I still have a fondness for the San Damiano Cross however. I think it is the iconic style.
To digress to another subject: The American(1928) Book of Common Prayer: I have been researching various editions and I notice that the 'traditional' ones like the 1928 are no longer in print. Even the one printed by Oxford in anything but hardbound is "OUT OF PRINT". So, who will print them? I mean in Leather bound deluxe editions? Who owns the right to print? Just curious.

I'm not sure who "owns" the rights to the content (Abp. Cranmer penned most of it; all of the editions are simply reordering of his work; Coverdale did the Psalter). Anyone, I think, could offer a version identical to the 1928 in content.

Along those lines, the Reformed Episcopal BCP has taken the 1928 BCP and added the 1662 Communion and inserted a few "new" elements into it (impositions of ashes, Creed of St. Athanasius, etc). They do have a leather edition available.

The Anglican Parishes Association of the Anglican Catholic Church publishes some nice red hardbound editions of the 1928 with either an "Anglican Catholic" title page or a "neutral" page (in either case, no mention of the now defunct "Protestant Episcopal Church"). However, to my knowledge, no leather editions.

I'm surprised to hear that the Oxford leather 28 is no longer available--I haven't checked Amazon in a while on that matter. Perhaps they'll bring it back. If not, there's a good chance that the Prayer Book Society might be interested in something like that, in that they've published the new 1928 Altar edition.

As an artist, I appreciate the creativity of the "Christus Rex" image, as well as its theological message, much in the same way I appreciate an image of Jesus Christ in eucharistic vestments. It says something true in an interesting, creative way.

I think that a crucifix is obviously more accurate historically. Crucifixion was brutal, and the one being killed that way hung there, dripping blood. To portray Christ on the cross, if one wants to be historically accurate, is to portray Him rather gruesomely, I'm afraid.

That said, I have to admit, though, that I am somewhat ambivelant about whether that, a cross, or a crucifix is used in a church. At St. Mark's we have all three (in different places, obviously).