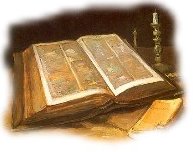 The Articles of Religion of the Church of England: Article VI. Of the Sufficiency of the Holy Scriptures for Salvation.

"Holy Scripture containeth all things necessary to salvation: so that whatsoever is not read therein, nor may be proved thereby, is not to be required of any man, that it should be believed as an article of the Faith, or be thought requisite or necessary to salvation. In the name of the Holy Scripture we do understand those canonical Books of the Old and New Testament, of whose authority was never any doubt in the Church."

A Christian view of the works contained in the Old and New Testaments hinges on their acceptance as being “inspired” texts. However, this term is used often but seldom defined. To an extent, this is for good reason. To define the act of inspiration too narrowly would limit the manner in which God communicates Himself to His creatures. To define it too broadly can evacuate the term of any relevance. The Rev. Dr. C.B. Moss (1957) comments that the Church herself has never exactly defined the concept of inspiration. The Rev. Louis Tarsitano (1994), however, provides a general summary of the concept (broadly understood) that seems to be the majority view within traditional Christian teaching:

"The inspiration of the Bible begins with God’s reaching out by the power of the Holy Ghost to the human writer, followed by the writer’s response (also in grace) with all his heart, soul, and mind. The inspiration of the Bible is not the same thing as the dictation of a letter to a secretary. Inspiration is the relationship between God and those he chooses to be his messengers and spokesmen, just as salvation is the relationship between God and the redeemed. God’s messengers are not perfect as God is perfect. They have limitations based on who they are, and where and when they lived." (p 63)

The authority of Holy Scripture can be said to be fourfold (after the eminent evangelical scholar F.F. Bruce in his text The Canon of Scripture), stemming from 1) its inspired nature, 2) its acceptance by the whole people of God as inspired (also referred to as “catholicity,” the use and acceptance of texts by the whole Church), 3) its teaching (as inspired and accepted by the Catholic Church of God as inspired) as providing for right teaching of doctrine, worship, and living (“orthodoxy”), and 4) its providing for a truthful witness to the actions of God in the in the midst of His people (“historicity”). For the New Testament, this “truthful witness” or “historicity” can also be called “apostolicity,” for the New Testament is assumed by the Church to provide information on the life and teaching of Christ according to the Apostles and the faith and life of the Apostolic Church as it was observed and understood by those who lived within it. These criteria set the Bible apart from other theologically sound literature, for only the texts contained in the canon of Scripture can be said to meet them all. For instance (to use an example given by Bruce), what if another Epistle of Saint Paul were found today and could be reasonably verified as being composed by him (perhaps the letter he mentions writing to the Church at Corinth)? Who would doubt its teaching? Who would doubt that Saint Paul was inspired in his writing? Would it then be added to the canon of the New Testament? The answer, in all likelihood, would be “no.” Although this letter could very well be inspired, written by the hand of an Apostle, and completely orthodox in its teaching, it is not part of the New Testament that has been accepted for centuries as part of the Christian Bible. It would fail to meet the practical standard of “catholicity.”

It must be noted that all four of the sources of authority mentioned above assume that the Church that has recognized such characteristics has been guided by the Spirit of God to do so. The Church does not have a “Koranic” view of the Holy Scriptures (the “secretary dictation” model mentioned above by the Rev. Tarsitano), meaning that it does not assume that God produced Scripture in a manner without human mediation or somehow overcame the human being to compose a text. The life of the Holy Spirit (in worship and faith) is needed to discern the working of that same Spirit in the writings and the content of Holy Scripture. It was that Church, whose leaders were taught by the Apostles themselves, that maintained the Apostolic Succession (in life, order, and teaching), that celebrated the Sacraments of Christ’s command, and that recognized the soundness of Apostolic doctrine and the inspiration that provided the foundation for this doctrine. However, it must always be presumed that the Bible has a level of authority that surpasses the writings of latter saints, such as Clement of Rome or Augustine of Hippo, that most would not deny were, in some manner (perhaps not in the very same manner as the Apostles) inspired by God. While many of the writings of Augustine are noteworthy, orthodox, and perhaps even inspired, they have never been accepted by the whole Church as the letters of the New Testament have. Indeed, these writings are always to be measured against the Bible. As Vincent of Lerins states, “The Canon of the Scripture is perfect, and the most abundantly of itself sufficient for all things.” As one Anglican divine succinctly put it: “The Church to teach, the Scriptures to prove.”

The Church was inspired to compose, collect, and teach the Scriptures, but never to depart from the faith contained in the Scriptures. As such, we can faithfully claim that our faith is based upon sola scriptura (the scriptures as read by the Church universal), but not upon “solo scriptura” (every man alone with his Bible, ignoring the all history that preceded his opening the Book). The Bible is the Word of God among His people, proclaiming to them His deeds within history and the relation of the redeemed community of faith to the people of God in every age. We read these words and proclaim them to be His Word because we live in and believe in a Church that has faith in His actions and His revelation. Ultimately, we believe that the Bible is the Word of God because it contains the record of the ultimate expression of the nature of God in the Incarnation of Christ Jesus (as such it contains the revelation of Christ as the eternal Word of God as the Second Person of the Blessed Trinity). Christ is the fulfillment of the law, the prophets, and through His life and atoning work we have the New Covenant between God and mankind. To quote Bishop Frank Wilson (1937), “Christ Himself is the Word of God—that is, the personal expression of God. The Bible tells of Him and we therefore call it God’s Word. It is the record of the progressive revelation which reaches its summit in Christ” (p. 43).

The authority of the Catholic tradition (the tradition or the practice of the Church always and everywhere) of the Church is reciprocal to the authority of the Bible in the Church. William Laud, Archbishop of Canterbury (cited in Bourne, 1947) in dispute with both Puritans and Roman Catholics, argued that there are four possible ways of demonstrating that the Holy Scriptures are the Word of God. 1) By the universal tradition of the Church Catholic—it has always proclaimed the Bible as such; 2) “By the light and the testimony which the Scripture give to itself.” 3) By the testimony of the Holy Spirit; 4) By the testimony of natural reason. However, none of these demonstrations, or “proofs,” can be divorced from the others. Hooker argues that reason is the base for all claims, for by reason we have intelligence and understanding to decipher those things presented to us verbally and in written forms. Our interpretation of Scripture is dependent upon reason. However, Laud warns that reason alone cannot guarantee infallible authority:

"Reason can give no supernatural ground into which a man may resolve his faith, That Scripture is the word of God infallibly, yet reason can go so high, as it can prove that Christian religion, which rests upon the authority of this Book, stands upon surer grounds of nature, reason, common equity, justice, than any thing the world which any infidel or mere naturalist hath done, doth, or can adhere unto, against it, in that which he makes, accounts, or assumes as religion himself” (cited in Bourne, 1947, p 86)

The third approach depends on a revelation to an individual, and the lack of any objective check on such special revelation must be suspect (the revelation should—must—conform to the Bible and the teachings of the Bible as set forth by the Church Catholic). As Hooker comments concerning the Anabaptists: “When they and their Bibles were alone together, what strange, fantastical opinions soever at any time entered into their heads, their use was to think the Spirit taught it to them.” And from such an approach we see a thousand or more different denominations claiming the unique truth of Christ based upon the Bible and the Bible alone. Each often makes new and unique practices peculiar to its founder and followers. The Anglican Reformers (and the Anglican Church until the last 100 years) always used the Holy Scripture, the universal tradition of the ancient Church, and reason to inform her doctrines.

Thanks for another superb entry.

I would argue that the necessity of the Church and her traditions- subordinated to the supremacy of Holy writ as the inspired record of the Father's ultimate revelation in the incarnation, life, death, resurrection and ascension of the Son-has been the Anglican answer to the question of authority at least since the time of the Elizabethan settlement, if not earlier.

This certainly is the view taken by the 39 Articles, especially in articles VI, VII, VIII, XX , XXI and XXXIV ( it is of interest to note that Art. VI explicitly establishes canonical authority via an appeal to the Church Catholic : "In the name of the Holy Scripture we do understand those canonical books of the Old and New Testament, of whose authority was never any doubt in the Church." ).

The Reformed canon law of the late 16th-century English Church also expressed this view in no uncertain terms by exalting the Scriptures above Fathers, Creeds and councils, while, at the same time, requiring all priests to teach nothing as to be religiously believed and held except what "the old Catholic Bishops and Fathers have collected out of Scripture".

Finally, I am convinced that both liturgically and theologically this was what Abp Cranmer had in mind when described the reformed Divine Offices as agreeable "to the mind and purpose of the old fathers".

This is another fine post and I have linked to it on "Prydain." Thanks for this--perhaps the best one yet.

Good post. I would add that the traditional Book of Common Prayer is almost entirely sacred scripture put into devotional and liturgical format. so one can easily see how the following the BCP is following the scriptures for our salvation.