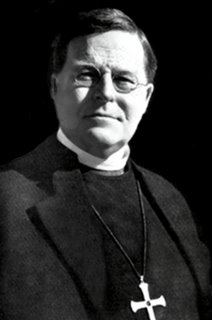 William Temple, Archbishop of Canterbury, on symbolism and the Holy Eucharist

In the physical universe symbolism is the principle of existence. Each lower stratum of Reality exists to be the vehicle of the higher. The organism which was Christ’s Body in His earthly ministry derived the significance entitling it to that name from the fact that it was the instrument and vehicle--the effective symbol--of His Spirit. . . .

The identity which makes it appropriate to speak of our Lord’s fleshy organism, the Church, and the Eucharistic Bread by one name—the Body of the Lord--is an identity of relation to His Personality on the one hand and to His disciples on the other. The addition of the outpoured Blood makes it plain that it is the symbol of His Personality as offered in sacrifice. As we receive His sacrificial Personality we become able to take our part in the one Sacrifice, which is the self-offering of humanity to God. . . .

It is essential to the spiritual value of this sacrament that we do what the Lord did. It is all symbol, but it is expressive, not arbitrary, symbol; that is to say, the spiritual reality signified is actually conveyed by the symbol. The symbol is emphatically not mere symbol; if it were that, we should only receive what our minds could grasp of the meaning symbolised. It is an instrument of the Lord’s purpose to give Himself to us, as well as the symbol of what He gives. What we receive is not limited by our capacity to understand the gift. When with the right intention I receive the Bread and the Wine, I actually receive Christ, whether I have any awareness of this at the moment or not, and always more fully than I am aware. We, by repeating and so identifying ourselves with His sacrificial act, become participants in His one sacrifice. (1924, pp 239-251)
Posted by Rev. Dr. Hassert at 4:17 PM