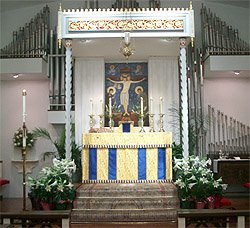 In the beginning was the Word

The interesting things about this church are not only its interior, with its beautiful icon above the altar, but also its history.

From the web page of the parish (http://www.stjohntheologian.org/) we learn:

"Saint John’s was founded in 1969 by the Rev. Dr. Winfield Blair Sutphin as The Ocean Chapel. In 1973 the church moved to its present location and affiliated with the Christian Church (Disciples of Christ), though it continued to be essentially an ecumenical church. The name was later changed to St. John’s Christian Church. Dr. Sutphin remained at St. John’s until his death in 1990. He was a highly literate man of keen intellect and an enormously gifted preacher of international repute. . . .

In 1992 the Rev’d Voris Glenn Brookshire was called from 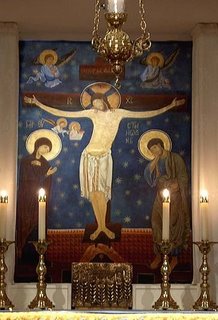 ecumenical work as the church’s second minister. Under his leadership the church moved in a more catholic and liturgical direction. On November 1, All Saints Day, 1998, Fr. Brookshire was ordained priest by the Right Rev’d Mark D. Haverland and the congregation was received into the Anglican Catholic Church. The church was then renamed The Anglican Catholic Church of St. John the Theologian. The use of the Eastern Orthodox name for St John the Apostle and Evangelist reflects the church’s effort to embrace as fully as possible the whole of the catholic Church in its eastern and western expressions. A number of Russian icons throughout the church echo this same emphasis. In 2000 the sanctuary was renovated by Edward Zucchi of Victor Zucchi & Sons , Bogata, N.J., to make it more appropriate for Anglican Catholic worship. The Altarpiece was painted by Norman Woehrle after the fresco of the Crucifixion (1208-09), Church of the Virgin, Monastery of Studenica, Serbia. A new sacristy was built in 2002."
Posted by Rev. Dr. Hassert at 1:31 PM

The rector has quite the library.