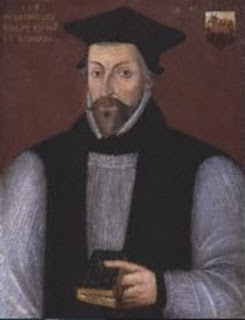 Bishop Ridley on the Holy Eucharist

(in discourse with representatives of the Church of Rome)

"Both you and I agree herein, that in the Sacrament is the very, true, and natural Body and Blood of Christ; even that Which was born of the Virgin Mary; Which ascended into heaven; Which sits on the right hand of God the Father; Which shall come from thence to judge the quick and the dead; only we differ in modo, in the way and manner of being. We confess all one thing to be in the Sacrament, and dissent in the manner of being there. I, being by God’s word fully thereunto persuaded, confess Christ’s natural Body to be in the Sacrament indeed by spirit and grace, because that whosoever receiveth worthily that Bread and Wine, receiveth effectually Christ's Body and drinketh His Blood (that is, he is made effectually partaker of His passion); and you make a grosser kind of being enclosing a natural, a lively, and a moving body, under the shape or form of Bread and Wine. Now this difference considered, to the question thus I answer, that in the Sacrament of the Altar is the natural Body and Blood of Christ vere et realiter, indeed and really, if you take these words ‘indeed and really’ for spiritually by grace and efficacy; for so every worthy receiver receiveth the very true Body of Christ. But if you mean really and indeed, so that thereby you would include a lively and moveable body under the forms of bread and wine, then, in that sense, is not Christ's Body in the Sacrament really and indeed."

"Always my protestation reserved, I answer, thus; that in the Sacrament is a certain change, in that the Bread, which was before common bread, is now made a lively presentation of Christ's Body, and not only a figure, but effectuously representeth His Body; that even as the mortal body was nourished by that visible bread, so is the internal soul fed with the heavenly food of Christ's Body, which the eyes of faith see, as the bodily eyes see only bread. Such a Sacramental mutation I grant to be in the Bread and Wine, which truly is no small change, but such a change as no mortal man can make, but only that omnipotency of Christ’s word." – Works, edit. 1843, p. 274

"Think not because I disallow that Presence which the first proposition maintaineth (as a presence which I take to be forged, phantastical, and beside the authority of God’s word, perniciously brought into the Church by the Romanists,) that I therefore go about to take away the true Presence of Christ's Body in His Supper rightly and duly ministered, which is grounded upon the word of God, and made more plain by the commentaries of the faithful Fathers. They that think so of me, the Lord knoweth how far they are deceived. And to make the same evident unto you, I will in few words declare what True Presence of Christ's Body in the Sacrament of the Lord's Supper I hold and affirm, with the word of God, and the ancient Fathers.

"I say and confess with the Evangelist Luke, and with the Apostle Paul , that the Bread on the which thanks are given is the Body of Christ in the remembrance of Him and His death, to be set forth perpetually of the faithful until His coming.

"I say and confess the Bread which we break to be the Communion and partaking of Christ's Body with the ancient and the faithful Fathers.

"I say and believe, that there is not only a signification of Christ's Body set forth by the Sacrament, but also that therewith is given to the godly and faithful the grace of Christ's Body, that is, the food of life and immortality, and this I hold with Cyprian.

"I say also with Saint Augustine, that we eat life and we drink life; with Emissene, that we feel the Lord to be present in grace; with Athanasius, that we receive celestial food which cometh from above; the property of natural communion, with Hilary; the nature of flesh and benediction which giveth life, in Bread and Wine, with Cyril; and with the same Cyril, the virtue of the very Flesh of Christ, life and grace of His Body, the property of the Only-Begotten, that is to say, life, as He Himself in plain words expounded it.

"I confess also with Basil, that we receive the mystical advent and coming of Christ, grace, and the virtue of His very nature; the Sacrament of his very Flesh, with Ambrose; the Body by grace, with Epiphanius; spiritual flesh, but not that which was crucified, with Jerome; grace flowing into a sacrifice, and the grace of the Spirit, with Chrysosthom; grace and invisible verity, grace and society of the members of Christ's Body, with Augustine.

"Finally, with Bertram, (who was the last of all these,) I confess that Christ's Body is in the Sacrament in this respect; namely, as he writeth, because there is in it the Spirit of Christ, that is, the power of the Word of God, which not only feedeth the soul, but also cleanseth it. Out of these I suppose it may clearly appear unto all men, how far we are from that opinion, whereof some go about falsely to slander us to the world, saying, we teach that the godly and faithful should receive nothing else at the Lord’s table, but a figure of the Body of Christ." – p. 201, 202
Posted by Rev. Dr. Hassert at 8:55 PM

So much for the idea that our Reformers were crypto-Zurichers, mere memorialists, exponents of the true absence of Christ, ad nauseum.

Apparently Dom Gregory Dix either had a very poor Anglican library, could not read, or was intentionally distorting history.

Dom Gregory Dix was essentially an Anglo-papalist and while very clever was never quite the scholar he is made out as being. But you would never have wanted to get in a Latin debate with him.

A large part of the problem is that Latimer and Ridley have been embraced by those of essentially Protestant and anti-Catholic views. They believe that if Rome burned them, there must have been real reason and that was because they agreed with those who embraced Zurich and Geneva. It should remind all of us to read the originals and never quite take the word of those who have an axe to grind in the quarrel.

Many, many thanks to Father H. who has scored again.

I just realized that the picture that I placed along the post was one of Bishop Jewel, not Bishop Ridley.