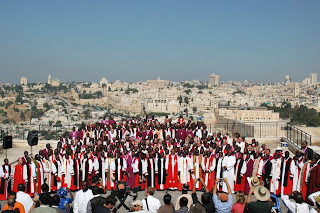 Some initial thoughts (on GAFCON)
by + John H. Rodgers Jr.

It is important, when considering what was accomplished at GAFCON, to keep in mind its singular focus. That focus was to identify the Anglican grasp of the apostolic faith, to claim that identity for the whole Anglican Communion and to provide a firm oversight and standing from which to confess the apostolic faith as we Anglicans have received it. This singular focus meant that many very important matters were not directly addressed at GAFCON, in the Statement or in the Jerusalem Declaration. This by no means relegates matters such as the status of 5th, 6th and 7th Councils, the ordination of women, the form of the Anglican Communion, abortion, the nature of and conflict with militant Islam, our relation to the persecuted Church etc. to secondary issues. There are serious issues and differences among the fellowship of confessing Anglicans that must and will be faced. It will not be easy, nor will solutions be sudden, nor can we be absolutely certain that some will not, in the end, decide they must walk apart. The difference is that they will be faced in the context of the authority of Holy Scriptures and the apostolic faith as Anglicans have historically received it. The Conference said, echoing Canon A5 of the Chu rch of England: “The doctrine of the Church is grounded in the Holy Scriptures and in such teaching of the ancient Fathers and Councils of the Church as are agreeable to the said Scriptures. In particular such doctrine is to be found in the Thirty-Nine Articles of Religion, the Book of Common Prayer and the Ordinal. We intend to remain faithful to this standard and we call on others in the Communion to reaffirm and return to it.”

With that in mind, let me state I believe to be the most important things that we did accomplish:

1. We are the Communion. “We are not breaking away from the Anglican Communion.”
In essence the fellowship of confessing Anglicans took things in hand and declared that we are the true and faithful Anglicans, upholding the historic Anglican grasp of the apostolic faith, and as such we are the true representatives of the Anglican Communion. Let those who are departing from historic Anglican convictions about the authority and content of the Scriptures come back to what Anglicans have confessed all along. If they are unwilling to do so, it is they, not we, who should leave. I suspect that there are differing expectations among those who have placed themselves under the Jerusalem Declaration as to the future of the structures and membership of the Anglican Communion as it is presently constituted. I myself do not see how we can long abide together structurally, but I could be wrong, my friends do remind me of the parting of the Red Sea and God still does miracles. However, of a faithful confessing Anglican Communion, all at the Conference expressed a confidence in a fruitful and “bright future”.

2. We are under the Jerusalem Declaration.

If we are a confessing fellowship of Anglicans, then we have to be clear as to what we are confessing. In essence we are simply confessing what the Scriptures confess, the apostolic confession. The 16th Century Reformation was not a new faith but a correction of teachings and practices where the Western Church had contradicted Scripture. It was a return to the apostles teaching, particularly with regard to the depth of sin in fallen humanity and the application of God’s grace to the sinner. The specific value of the Declaration is not that it is new, for it is not; it is really ancient in content. The value is that it is clear and concise and we can all be held accountable to teach and act in accord with its statements. One need only to be familiar with much that is being said and taught and done in significant portions of the Anglican Communion today to see what a difference adherence to the Declaration would make, were all to comply with its teaching. We mean to set a caring, welcoming example of obedience.

3. We are under the oversight of Primates who themselves are under the Jerusalem Declaration.
The establishment of a Council of Primates who can and will give recognition, oversight and direction to the various expressions of the fellowship of confessing Anglicans constitutes a new form of authority among Anglicans. It is an effective form of authority. It is concilior, that is, we are governed by a council. It has authority to act. And it is new and distinct from the all other authorities previously existent in the Anglican Communion. It is hoped and expected that other Primates will be added to this Council. There is a freeing aspect to the formation of the Primates Council as well. Being under the Primates Council, we can ignore erroneous and oppressive structures and leaders. In the Jerusalem Declaration we have said that we reject the authority of leaders, structures and churches that operate in contradiction of the apostolic faith as Anglicans have received it. For example, it is noteworthy that this Council of Primates will give recognition to the new orthodox province in North America. The Anglican Consultative Council, which is the official body in the Anglican Communion which recognizes provinces, will be by-passed and not be asked to recognize the new province. Surely this is an application of the rejection of an authority which at present is not seen to be in agreement with the apostolic faith. Couple that claim to and exercise of authority with the assertion that being Anglican is not necessarily attached to recognition by the Archbishop of Canterbury and one sees a very serious demarcation and hedge of protection for the fellowship of confessing Anglicans and for the call to all Anglicans to return to the apostolic faith.

Two thoughts come to mind. First, I wonder if those quickly reading the Statement and Declaration have realized just how serious this action is. One could hold that this action is actually more searching and radical than just leaving would have been.

Second, we can only hope that this initial concilior form of governance under the Primates Council will one day be the form of the entire Anglican Communion. At present, with our autonomous provincial structure, we Anglicans lack an authority to effectively discipline errant provinces. The Concilior form of oversight is biblical, apostolic, patristic, catholic, and ecumenical in nature. Our present structure in the Anglican Communion has existed only after Henry the VIIIth absorbed concilior authority to Himself and as the Anglican Communion grew outside of the Great Britain. Our loose federation resembles an international annual family picnic more than a global Communion. The early Church held a council not a picnic. Unlike some in fellowship of confessing Anglicans, I do believe the Communion is a visible expression of the One, Holy, Catholic and Apostolic Church as are congregations, dioceses and provinces, each in their own sphere, and hence is best governed by a council and is to be in conformity to Articles 19, 20 and 21 of the 39 Articles. This too is a difference among us needing to be addressed in the days ahead.

Conclusion: On Mission: Free to Serve

We do not know what the future holds, given this bold claim and action by the fellowship of confessing Anglicans, but we do know that we have been delivered from the oversight and from limitation by those oppressive structures and leaders in the Communion (not all of structures and leaders in the Communion by any means) that have been moving in an increasingly unbiblical consensus and direction. Such compromise, error and time-consuming delay has hindered us in our mission. Now we have been freed to serve without hindrance or delay. May we in the days ahead, by God’s mercy, take full advantage of the freedom to serve Him that He has given to us. And may the entire Communion return to its apostolic foundation and calling. So help us God!
Posted by Rev. Dr. Hassert at 5:33 PM

Gee Whiz, why am I underwhelmed?

Worse, not only does GAFCON tacitly allow women;s ordination, but now the C of E has approved women's episcopal ordination.

Providentially, beyond the choice of the so-called Liberal Christianity of Canterbury and 815, or the "Womengelicalism" of GAFCON, we have the Continuum and possibly the free-standing REC/APA assuming they move to cut connections with GAFCON.

The Continuum may perhaps be Anglicanism's last great hope ( although it isn't without its own problems, if a robust Prayer Book catholicism is your game ). Sad to say, the much-anticipated merger between the REC and APA is by no means a sure thing, and I don't see the REC severing itself from GAFCON anytime soon.

When the local boys return from GaffeCom, it is up to those of us in the Continuum to challenge them and theirs on the matter of strict adherence to the ancient standards of Anglicanism. The are advertizing this as a new Reformation but to those of us are traditional prayer book men it looks and smells more like "bait and switch."

I find myself in the not to be envied position of having to take on our own local who got a big write up in the religious section of the paper yesterday. It will be uncomfortable because he is a priest that i really like and he is already in a position of being undermined by a retired TEC bishop. But if you value real prayer book and Biblical Anglicanism based upon Andrewes canon of "one canon, two testaments, three creeds, four councils and five centuries", what else can you do?