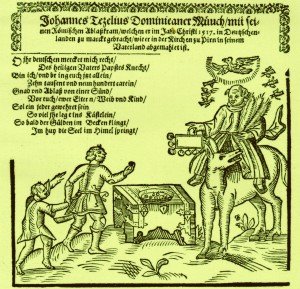 XXII. Of Purgatory.The Romish Doctrine concerning. . .Pardons (or Indulgences). . .is a fond thing, vainly invented, and grounded upon no warranty of Scripture, but rather repugnant to the Word of God.

Note: Lord Bishop Browne's Exposition on the Articles is the basis for the historical information in this piece.

In the last post I dealt with the question of linking prayers for the dead with a belief in the Roman doctrine of Purgatory, this doctrine holding that there is a place where the faithful must suffer for their sins in their existence after death. As we saw, via recourse to sources from the Eastern Church and the more "reformed" tradition in Anglicanism, that growth in the Intermediate State is not to be equated with Purgatory. The two concepts are not identical, although some defenders of the concept of Purgatory often present them in this manner.

As Father Anderson pointed out in a comment to the Purgatory post, the belief in this state was tied tightly in the Middle Ages to the practice of Indulgences ("Pardons" in the Article). Bishop Browne traces the history of "indulgences" or "pardons." They were not originally tied to Purgatory. In the ancient Church a martyr or confessor in prison could intercede on behalf of an individual censured by the Church--such a relaxation of a penance was done by the bishop of the diocese. The bishop might shorten a term from which someone was kept from the Eucharist or, as was mentioned, lessen some other penalty. It must be noted that these penalties were temporal in nature, imposed in the here and now and to be completed in the here and now.

You can see where the logic might now go, becoming tied to the concept of Purgatory. The teaching concerning pardons was expanded to include not only the censures of the Church but the pains of Purgatory as well. If the episcopacy could lessen a sentence in the temporal realm, could it not also lessen the pains in the life after this? So, we see the concept of "pardons" from temporal punishment in this life carried over to the next. But how could a bishop grant indulgences to the souls in Purgatory? Someone in this life would have to do some deed or another to merit this action. Prayers, masses, donations to the Church all became reasons for the granting of Indulgences. The first use of indulgences tied to Purgatory can be dated to the papacy of Alexander III at the end of the 12th century. This corruption of an ancient practice reached its height with Leo X with Tetzel openly selling indulgences in Germany:

"When the coin in the coffer rings, the soul from purgatory spring!"

It is this that the Article rejects. Being tied to Purgatory as it is in the corrupt form mentioned above, we must also point out that the Old Catholics (in the Fourteen Theses) retain the older teaching concerning indulgences:

"We agree that “indulgences” can only refer to penalties actually imposed by the Church herself."

Therefore, prayers for the departed are 1) in no way tied to the teaching of Purgatory held in the Middle Ages, and 2) even if one were to hold to the Roman teaching of Purgatory, this does not logically require one to accept the Roman teaching on Indulgences, for in their original use they were tied only to temporal punishment imposed by the Church. However, the two tied together, as they were in the Western Church of the Middle Ages, were in need of reformation and/or outright repudiation.

In this writer's humble opinion, the Rev. Dr. Luther had just cause for his protestations against both the concept of Purgatory as a place were penalties were imposed for sins, and the notion that the Church had the authority to buy and sell Christian souls out from such a place. In our previous examination of the teaching concerning the Intermediate State, there is no need to throw the "baby" of spiritual growth after death and prayers for and with the faithful departed out with the murky bathwater of late Roman doctrine, for such practices existed in ancient Church and in the Eastern Church--without ties to erroneous doctrine these practices can be rightly kept as orthodox. If they are ever misunderstood by the faithful, it is the role of the clergy to provide clear and correct information.

The next entry will address the Invocation of the Saints.
Posted by Rev. Dr. Hassert at 6:09 PM

True enough. I beleive that, at heart, Luther was revolting from the innovative, medieval, Latin doctrinal complex of merits, supererogation, purgation and indulgences -- which smacked of works-type salvation (or atleast works aided the 'speed' of salvic realization). And in this, he was entirely correct and has the support of the Eastern Church too.

The granting of Indulgences, not only for relief of temporal penalties but also for [supposed] relief of penalties in Purgatory, is still the teaching of the Roman Communion. They make a great deal out of the "treasury of the merits of the saints" which can be redistributed to souls in purgatory to buy them some relief. Who arbitrates this speculative system? Why, the Roman Church, of course.

Question: do not some "Continuing" Anglicans give their tacit approval to the notion of Indulgences when they publicly plead the "merits" of the Saints through the prayers of the "Anglican Missal"? And, does this not constitute a significant doctrinal change?

"Question: do not some "Continuing" Anglicans give their tacit approval to the notion of Indulgences when they publicly plead the "merits" of the Saints through the prayers of the "Anglican Missal"? And, does this not constitute a significant doctrinal change?"

Good call, Father. Indeed, I think it does. I'll touch upon this briefly in the next post. I have the Anglican Missal and the Priest's Manual (I like about 98% of the Manual and have had a few opportunities to use its services), but in a few places I can see they not only copied Roman prayers verbatim, in some places they made them more Roman than Rome(!). If a revision were to be made of these books, such elements would need to be removed to make them "more Catholic" and "less Roman."

Some Continuing Anglicans definitely accept the Doctrine of Merits.

But, many of the missal prayers that use "merits" predate the invention of the doctrine by centuries. In those instances, "merits" probably simply was understood as a synonymn for "by the prayers [merits] of Saint X."

Still, due to the internvening medieval Latin teaching, such prayers ought to be revised, as they are now quite patient of error. Still, the Missal Anglicans won't hear of it. Hence, my website: The Patristic Anglican.

Good points. I know that the Roman Missal prayers predate the teaching of the Middle Ages, but I agree and think that since Romans and many Anglos accept the erroneous teaching (and use the old prayers to defend the teaching, using a historically false reading of them) it is best to remove this phrasing from prayers that already mention our asking God the Father for the "prayers of the saints." If we make mention of "merits" and "prayers" it is confusing and open to misinterprentation.