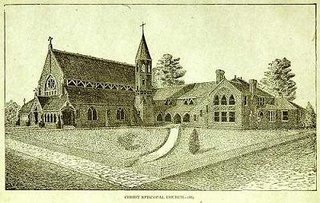 Joliet Illinois, before the city was even really there.

Again, a short history of the parish (from the Joliet Herald):

May 1848 - April 1853: During the Gold Rush and cholera epidemic, church members do not hold vestry meetings as numbers dwindle to seven.

June 1857: Members worship in their new church building: a small, wooden structure featuring stained glass windows at the northeast corner of Joliet and Van Buren streets. The windows were later incorporated into the modern-day structure.

May 1935: Christ Episcopal Church celebrates the 100th anniversary of its founding with activities and a special book featuring well wishes from clergy and the parish's history. The theme is "They have builded Him an Altar."

June 1953: Bishop Wallace Conkling dedicates St. Edward Chapel at Campbell Street and Midland Avenue. It is intended to serve as a West Side extension of Christ Episcopal.

August 1982: The Christ Episcopal Church building erected in 1887 is placed on the National Register of Historic Places.

November 2003: Faced with dwindling numbers and mounting expense for the Christ Episcopal building, members from Christ and St. Edward vote to close the Christ Church building and merge the two congregations.

January 2004 - early 2006: The future of the old Christ Episcopal Church building is uncertain.

August 2006: Joliet resident Mark Tomac and other local investors publicly confirm they have purchased the building and plan to reopen it as a concert venue in March 2007.