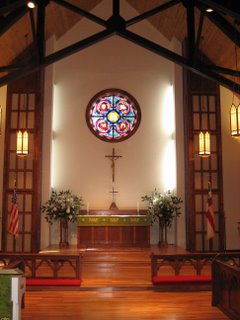 Another beautiful new parish church in the classical Anglican tradition:

In June 1979, a group of 13 traditional Episcopalians began meeting for Sunday morning worship services in the living room of the home of Doris and Oz Keller, near Piedmont Park in Atlanta. Gradually, they began meeting in each others’ homes on a rotating basis and a fellowship developed which formed the nucleus for a small parish, called St. Barnabas Anglican Church.

The name St. Barnabas was selected because the first meeting was held 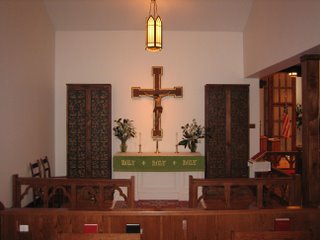 near the traditional St.
Barnabas Day, June 11th. Also, the qualities ascribed to Barnabas in the Bible were “an encourager, a good man, full of the Holy Spirit and of faith; and a generous man both in heart and hand.” These qualities exemplified those they aspired to promote both individually and corporately.

It became evident that a priest was required to provide more fully for spiritual needs. In August 1979, the Rev. Robert C. Harvey, rector of St. Timothy’s Parish, Charleston, South Carolina, offered his services on a part-time basis. Arriving on Sunday afternoons, each month, Father Harvey preached and celebrated the Holy Eucharist. A lay reader, usually John Crown, conducted Morning Prayer and read a sermon the other Sundays.

The congregation began meeting in a community room of a local bank in Toco Hills. Because of the large Coke machine that spewed distracting noises, it was called the “Coca-Cola Church.” Either unplugging the machine or trying to ignore it, they met each week assembling and disassembling the altar, bringing in Prayer Books and hymnals, coffee pots, kneelers, vestments, and altar linens.

In the spring of 1980, Father Harvey was elected Bishop of the Diocese of the Southwest. The
congregation was at a loss on how to acquire another priest. At Bishop Harvey’s consecration service, Dr. Carroll E. Simcox, former editor of The Living Church was present and preached the sermon. He was approached by the group and asked if he would consider ministering to St. Barnabas. This request seemed reasonable to Fr. Simcox, who had retired from the Episcopal Church and was living in Hendersonville, North Carolina. For eleven years Dr. Simcox flew down twice a month to minister to us through our various moves from the bank, a hotel, the LaVista Womans Club, and finally to our present church in Dunwoody.

In January 1990, our then Presiding Bishop A. F. M. Clavier, ordained William R. Weston [a member of our parish] to the diaconate and to the priesthood in June 1990. He was named priest-in-charge until the permanent retirement of Dr. Simcox. In 1991, Father Weston was called as rector, the position h 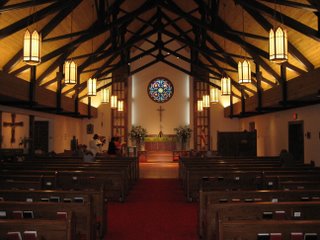 Bishop Harvey, who lost his lovely wife Suzanne in 1994, married Marguerite Pendleton in 1995.
He returned to Atlanta with Marguerite, joined the clergy staff and is active as a bishop within the diocese and the Church at large. The Rt. Rev. Peter Brewer was received into the Anglican Province of America in 1998 and became the fourth member of the clergy staff. He currently serves as suffragan bishop of the diocese and is rector of St. John’s Anglican Church, Greensboro, North Carolina.

Now, in its 27th year, St. Barnabas Church has grown from the original 13 believers to a congregation of over 325 and holds services in its current location acquired in 1991.

In 1996, a building committee, under the supervision of the vestry, developed a master plan for the property. The year 2001 saw Phase 1 of a planned expansion completed, which provided expanded parking areas, a new parish hall and kitchen, renovated class rooms, enlarged narthex, a new exterior and refinished nave and sanctuary. 2004 saw the acquisition of a temporary modular classroom building. This facility provided much needed space for the Children’s Chapel, Sunday School classrooms, and office space for our ever growing number of children. Future usage of our existing space is being planned by a Facilities Committee under the vestry’s over-sight.

Now, in 2006, we celebrate the completion of Phase 2 of the master plan, with the dedication of a 5600 square foot addition of new sacristies and nave and sanctuary. The new church’s architecture is Gothic Revival.

The vision of the founders, that St. Barnabas provide a faithful witness to the world continues. It is our prayer that the parish continues to grow both spiritually and in number for the greater glory of God.
Posted by Rev. Dr. Hassert at 7:01 PM

Anglican Cleric, I attend St Barnabas Church. It was a surprise therefore to see it mentioned in your blog. Small world.

I saw the excellent photos over at Apologetics Galore. I asked on that blog if the owner would mind me posting them here and he said "ok."

It is a very beautiful church. It reminds me of all of the excellent Gothic revival churches built in the late 1800s-early 1900s. Very tasteful and well proportioned.

I started posting the church pictures and some information on parishes as a response to the claim that the continuum "didn't have any buildings." Indeed, many congregations worship in rented halls and the sanctuaries of other churches, but as your parish illustrates, there are some beautiful buildings out there in which the classical Anglican Church "worships God in the beauty of holiness."

The building is indeed tasteful and beautiful. St Barnabas is definitely evidence that the continuum is alive and well, and growing. I'm of mind that the Episcopal Church controversy may turn out to be a catalyst for unity and consolidation among conservative Anglicans if handled correctly.

I agree, but we must call those now leaving TEC/ECUSA back to their Anglican roots and foundations.

Those now leaving seem to want to recreate ECUSA as it was 15 minutes before the consecration of Robinson, complete with the 1979 Prayer Book and female priests and bishops. The Virginia parishes and ++Akinola's new stance on women's ordination is evidence of this. Everything as it was, addressing one symptom while ignoring the disease.

Our unity must be in the Common Prayer of the classical and orthodox Prayer Books (1549-1928 English, 1928 American, 1962 Canadian) and in a common ministry based on catholic order.

A beautiful church. Next time I head down toward Atlanta . . . . Still, I would prefer a Christus Rex, though the Latin crucifixs were not outside the pale given their reasonably tasteful design and size and context.

Sorry, but not quite Anglican enough. The two crosses, one above the other, and the unvested altar with Pius V green frontlet indicates a lack of knowledge of what classical Anglicanism requires. The architect should have been asked to look at the churches of John Ninian Comper, particularly, St Philip's, Cosham for something which would work better with the classical Anglican liturgy. It might help to have folks look at the website of The Comper Trust.
But it could be rescued with a better architect, a more Anglican-ly knowledged one.

The multiplication of crosses in Anglican churches seems to be a pervasive problem. The cross on the altar and the crucifix above it is a bit of needless redundancy in symbolism. However, still a nice looking parish in my opinion.

"Bishop" Lee Poteet should take some of his own advice and learn how to do things properly and in order -- in other words, in the Anglican Way.

For starters, he's an Episcopus vagans, and therefore is outside of historic, orthodox Anglicanism. And the "parish" which he serves as "rector" meets in a motel. Those who throw stones at churches ought to at least worship somewhere that has some stained glass, rather than a blinking neon "Motel 6" sign out front.