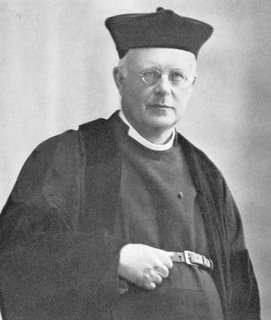 The Christian Priest in the Anglican Tradition:

Posted originally as part of a broader discussion at http://philorthodox.blogspot.com/

(from the Rev'd Dr. C.B. Moss and his text The Christian Faith):

The Anglican Communion claims that its bishops, priests, and deacons are bishops, priests, and deacons in the sense in which those words were used by the ancient Church and by the Roman Communion today. The Archbishop of Canterbury is a bishop in the same sense as the Pope. Every Anglican priest is as much a priest as any Romanist priest. It is his duty and his privilege to offer the Eucharistic sacrifice, to give absolution, and to bless in the name of the Church; and this claim is supported by the Prayer Book...' (The Christian Faith, 408).

There were three stages in the sacrifice or self-offering of our Lord, corresponding to three stages in the Old Testament sacrifices. The first was His death on the Cross, corresponding to the slaying of the victim. The second is His perpetual self-offering in Heaven which began with His Ascension and corresponds to the entry of the High Priest into the Holy of Holies carrying the blood of the sin offering on the Day of Atonement. The third is the Holy Eucharist, corresponding to the feast upon the sacrifice which belonged to the peace offering.The sacrifice of Christ is one and cannot be repeated. There is no sacrifice in the Christian religion other than the sacrifice of Christ. The Holy Eucharist is not in any sense whatever a repetition of Christ's death on the Cross or of His offering of Himself in Heaven. It is not called a sacrifice in the New Testament, nor are the Christian ministers called priests (hiereis). The reason is clear. Jewish priests and heathen priests were well known to the first readers of the New Testament. If the Christian presbuteroi (elders) had been called priests, it would have been supposed that animal sacrifice was part of their duty. But animal sacrifice had been abolished. Nevertheless, sacrificial language was used of the Eucharist, as we have seen, by our Lord Himself, who said, "This is My blood of the covenant", when He instituted the Eucharist. St. Paul called himself leitourgos, a sacrificial word (Rom. 15:16), doing priestly work (hierourgounta), that the offering (prosphora) of the Gentiles might be made acceptable. He contrasted the "table of the Lord" with "the table of devils", the heathen sacrifices (I Cor. 10:21), showing that he regarded the Christian Eucharist as sacrificial. The sacrifice of Christ was the Christian Passover; "Christ our Passover is sacrificed for us; therefore let us keep the feast" (I Cor. 5:7). Compare also I Cor. 10:18: the Jews who "eat the sacrifices" and "have communion with the altar" are compared to the Christian at the Eucharist.All the Fathers beginning with St. Clement of Rome called the Eucharist a sacrifice. So do all the ancient liturgies. But whereas the New Testament appears to regard the Eucharist as corresponding to the feast which was the last stage of the sacrifice, the Fathers taught that it was also the representation of earth of what is continually going on in Heaven. As the Epistle to the Hebrews constantly asserts, our Lord is the true High Priest, "a priest for ever after the order of Melchizedek" (Heb. 6:20) who passed into the heavens at the Ascension bearing His own blood (like the High Priest into the Holy of Holies), and who perpetually presents to the Father His own life, for His priesthood is unchangeable (7:24). The Christian Church of which He is the Head is "a royal priesthood" (I Peter 2:9) sharing the priesthood of its Head and His heavenly work of offering. This the Church does by the whole of her life which is, ideally, one long self-offering, united with the self-offering of our Lord in Heaven. But she shares in His self-offering especially at the Eucharist, in which the congregation is united with Jesus Christ in Heaven, first by offering His Body and Blood (with which all their other offerings, their alms, the bread and wine, their own lives, are united), and then by receiving it in communion.The earthly priest is the necessary organ of the Church for this purpose, as the eye is the necessary organ of sight. There can be no offering without him, but the offering is the people's, not his alone... (The Christian Faith, 369, 370).

The word "priest" represents both presbuteros, presbyter, and hiereus, sacerdos. The latter title was given to bishops from the third century onwards and later to priests as well. It describes them as "offering sacrifice". The Christian priest is not a priest in the same sense as the Hebrew priests under the Old Covenant. Our Lord Jesus Christ is the only Priest in the proper sense under the New Covenant. In what sense the Christian "presbyter" is also "sacerdos", sacrificing priest, has already been explained. The use of the word "presbyter" in the Catholic Church to mean a member of the second order of the Apostolic ministry is not to be confused with its use by the "Reformed churches". The Calvinist "presbyter" is not a priest but a preacher, as we shall see.The essential duties of the priest which cannot be performed by anyone but a priest (all bishops being also priests) are to consecrate the Eucharist, to give absolution to sinners, to anoint the sick, and to bless in the name of the Church. (Anyone may bless as a father blesses his children, but the blessing of the Church is given only by the bishop, or in his absence by the priest.)All these duties of the priest belong properly to the bishop and are performed by the priest as the representative of some bishop (or person with the jurisdiction of a bishop). In early times the bishop, when present, was always the celebrant of the Eucharist. The absolution and the blessing in the Eucharist are still given by the bishop of the diocese (or the suffragan or assistant bishop who represents him), even though he is not the celebrant.The priest is also ordinarily a pastor, teacher, and evangelist. He is the normal minister of baptism. These duties can also be performed by others; but they form the largest part of the priest's work, and his training is chiefly directed to prepare him for carrying them out. Experience has shown that though the functions which are confined to the priest are limited and can easily be learned, priests who should do nothing but perform those functions would be of little use. The priest's highest duty is to consecrate the Eucharist, and the next to give absolution. But the Eucharist must be accompanied by preaching and teaching, and the absolution must usually be accompanied by counsel. Therefore the priest must be a man of holiness, of learning, and of knowledge of human nature. He must know his Bible and be trained in dogmatic, moral, and ascetic theology, and in the art of teaching (The Christian Faith, 393, 394).
Posted by Rev. Dr. Hassert at 8:28 PM

Thank you for this blog. It has helped me as I look into the Reformed Episcopal Church. I hope I do come across as disrespectful in any way, but I still do not understand why we must confess (as in absolution in the Book of Prayer) before every Eucharist if Christ has paid for all my sin once for all. I believe 1 John 1:9 is advising (as does Romans 1) that we have to admit we are sinners before properly understanding Christ, but should this not only take place once and not over and over again as our identity is now in Christ? It seems this would bring an constant and unsure state of sin consciousness?. I thank you for all you labors in the Lord and for any insight you could provide. An abundance of God’s grace, rest, and peace to you and yours.