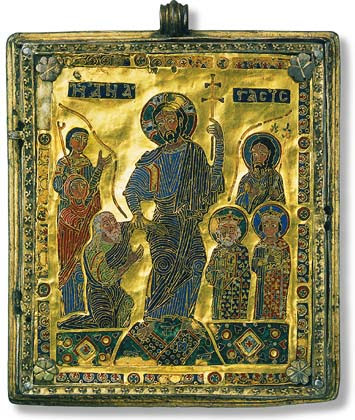 The Articles of Religion of the Church of England:

Article III: Of the going down of Christ into Hell

"As Christ died for us, and was buried, so also is it to be believed, that he went down into Hell."

See the First Epistle of St. Peter, chapter 3, verses 18-20: "For Christ also hath once suffered for sins, the just for the unjust, that He might bring us to God, being put to death in the flesh, but quickened by the Spirit, by which also He went and preached unto the spirits in prison, who one time were disobedient, when once the longsuffering of God waited in the days of Noah while the ark was being prepared, wherein few, (that is, eight souls) were saved by water."

What the Article affirms is again quite minimalist. The reason for this simplicity was to affirm only that which could be shown from the Scriptures, without giving a definitive interpretation. Theological arguments raged between clergy in England at the time of the Reformation over this issue. There are several lines that this Article of belief could take, including 1) that it means that Christ battled Satan while in "Hades" (which could simply mean the place of the dead) and this was the beginning of His exaltation (the Lutheran scholastic view), or 2) that Christ felt the loss of the body in the same way other humans do, in essence continuing His humiliation (the Calvinist scholastic view). It could also be a combination of these views, for we do have biblical support for the view that while He was He dead preached to those who "were in prison."

What this Article affirms primarily is that as Christ died a human death, so was His soul (the noncorporeal component of His humanity; man during life being composed of both body—soma—and a nature which informs the body, that being the soul--psuche) was still joined with the Godhead in the grave—the Person of Christ underwent all that humans undergo at the time of death until the Resurrection. The Second Person of the Trinity continued His existence as the Christ between the Crucifixion and Easter Sunday. Those Christians who desire to deny the reality of the soul are left with the question of what became of Christ Jesus while He was dead; without His soul going into Hades we are left with an annihilation of the Person of Christ between His bodily death and Resurrection, or else for those three days the Logos was not in any way joined to human nature in the Person of the Messiah, creating the only break in the existence of the Person of Jesus between the virginal conception and the Ascension.

From Hippolytus (c. 205):
"The jailer of Hades trembled when they saw Him. And the gates of brass and the bolts of iron were broken. For, look! The Only Begotten, God the Word, had entered Hades with a soul--a soul among souls!"

Origen (c. 248):
"When Christ became a soul, without the covering of the body, He dwelled among those souls who were also without bodily covering. And He converted those of them who were willing."
Posted by Rev. Dr. Hassert at 12:02 PM

That last paragraph is excellent about the consequences for doctrine of the denial of the reality of the soul. Call this another Trackback on "Prydain".

Thanks again for the link--I commend the readers of this blog to yours as well for the further helpful information on the Articles you've provided.