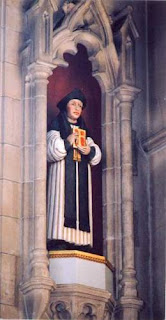 That Anglicanism is wholly "protestant" is an extremely simplistic assertion and hinges on the meaning of the term itself. However, so too is the contention among some that the term "protestant" doesn't apply to Anglicanism in even the slightest sense. If asked if we Anglicans are Protestant or Catholic some will say: "We are Catholic, but not Roman--we are not Protestants." This is simplistic and historically erroneous, and any layperson with an interest in reading would soon find very Catholic sounding Churchmen of the 16th and 17th centuries embracing the term Protestant. (But my rector said it wasn't so!) What to make of it then?

If we are using today's terminology perhaps "Protestant" isn't wholly accurate, but neither would be the use of the term "Catholic," for in today's use of the term this means Roman. Many Anglicans are happy to explain the historic and correct use of the term "Catholic" but do not wish to do so with the term "Protestant." This is a selective use of logic--if the historic usage of one term is explained the other term ought to be likewise explained. "You see, you misunderstand the term Catholic dear friend. . ." The follow up should be they also misunderstand the historic use of the term Protestant. However, it needs to be noted that many Anglicans today have become Latter-Day Puritans, attempting to sweep the Anglican Church of any hint of "Romanism" (which may mean choirs robed in surplices, a priest wearing a coloured stole, or keeping the 1662 Prayer Book calendar of saints days): Many from this group do indeed wish to deny any "Catholic" character or nature existing within Anglicanism. This also is to deny history.


To put it more concisely: "At the Reformation the Church of England became protestant in order to become more truly and perfectly Catholic." William Van Mildert, Bishop of Durham 1826-36.

Let me turn to the good Father Moss for a fuller explanation (from Answer Me This):


"Remember, 'Catholic' means universal. Strictly speaking, only those doctrines and practices are Catholic which have always been believed and used in all parts of the Church. More loosely, the word is applied to practices and traditions (such as the observance of Christmas Day or the use of special dress by the clergy) which have a long continuous history and are universally accepted, even though they do not go back to apostolic times. The word also implies 'orthodoxy,' holding the right faith and worshiping God in the right manner as required by the Church."

In answer to the question: Is the Anglican Church Catholic or Protestant? Moss replies


"Both; it is Catholic positively and Protestant negatively. It is Catholic in its essential nature because it maintains the Catholic and apostolic faith and order. It is Protestant, in the old sense (emphasis added), negatively because it rejects the papal claims to supremacy, infallibility, and universal jurisdiction, and the decrees of the Councils of Trent and the Vatican."

When one is confused as to the use of these terms, they ought to be clearly explained. Some will argue (as Moss actually does) that the term Protestant has changed so much that we should omit its use all together (many Lutherans argue likewise, in that the old use of the term Protestant only referred to Anglicans, Lutherans, and Presbyterians; now that it refers so loosely to almost anyone not Roman Catholic it has become meaningless). However, the same could be said of the term "Catholic," since almost everyone means Roman when they say "Catholic" in the United States: Let's just stop using the word since it is so easily misunderstood. In my opinion we should follow the language of the Anglican divines, using both terms correctly and explaining the meaning in a clear manner to avoid confusion.

Is Anglicanism Protestant or Catholic? Ideally it is both, in the best sense of both terms.

Thank you for a thoughtful and reasoned statement.

This is so helpful. I am making you a favorite

Dear Fr. Hassert, thank you so much for this. As a new (and perhaps too enthusiastic) Anglican, I appreciate your blog -- I hope you keep writing!

Dear Rev. Dr.,
I think you are right that "Protestant" should be explained just as much as "Catholic" - because under the proper understanding, the Eastern Orthodox too are Protestant, because they Protest the Supreme Authority of the Bishop of Rome.

Thank you for this post. I am transitioning from Catholicism to Anglicanism and am "relearning" faith.

Yes. A most excellent and helpful commentary. I also am finding the other posts most beneficial. Thank you.

Excellent! Both terms need clarification. For pastoral purposes it seems wise to me to at least be cautious on using these terms with lay people, many not having historical context as to the use of term. Though in educational moments clarification ought to made. Even the term Anglican needs clarification, for it no longer is synonymous with the Church of England.