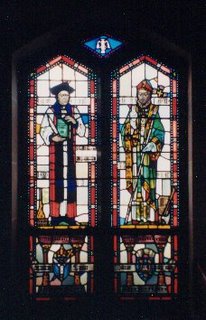 There is a seemingly unending debate as to whether Anglicanism is "Catholic" or "Protestant"--Some Anglo-Catholics often view Cranmer as a heretic, and William Laud is often viewed by evangelicals likewise. As everyone has noticed, at the top of this page is a quote from Bishop John Cosin (d 1672): "Protestant and Reformed according to the principles of the ancient Catholic Church." My reason for placing this quote in such a prominent position is to emphasize that the Anglican Reformers, Cranmer, Ridley, Jewel, etc (and the reformers on the contintent, Luther and Calvin) were protesting against the Church of Rome because they felt that Rome had added so much to the primitive faith so as to make it unrecognizable when compared to the faith and practice of the ancient Church: Purgatory, pardons, and indulgences, transubstantiation and gazing upon the consecrated bread with awe rather than following the command "take and eat," the service in Latin rather than the common tongue, priestly celibacy, papal jurisdiction over the whole Church, ritual that obscured rather than clarified the faith? Are these the characteristics of Catholicism? Do we find such things supported by an appeal to the Scriptures and the Fathers? Certainly not.

Cranmer faced the flames of martyrdom confessing that he believed nothing but that which the ancient Catholic Fathers and Doctors taught and professed--Cranmer was a martyr for the Catholic Faith, stripped of all that obscured it from the view of the common man. Many Anglo-Catholics proudly state that they themselves are Anglicans that "do not knock and kneel at the name of Cranmer" because the man was a "black hearted protestant." All of this stems from a misunderstanding of the nature of Catholicism, the continual confusion of the very term "Catholic" with the Church of Rome and her ritual, and the legacy Cranmer has left us in his Book of Common Prayer and the homilies. As Anglicans we are not Cranmerians, but we do need to take notice that when we hold the Prayer Book in our hands it was bought with the blood of men like Cranmer, Ridley, Latimer and King Charles and William Laud.

Those last two names mentioned bring us to another point: On the other side of the extreme there are those Anglicans who look at a man such as Archbishop William Laud and see all the evils of prelacy and view him simplistically as a man who sought to "bring back popery" to England. They find themselves in a strange predicament defending the actions of those who, in the end, saw their desire achieved in the Archbishop with his head on the executioner's block, the Church of England and its bishops in exile, and the Book of Common Prayer suppressed--going so far as to forbid it for the funeral of a king. While they may view the death of Cranmer as an example of martyrdom (as I do as well) they look upon Laud as a Romanist fanatic and his death as justified. What did Laud seek to do that earns him such hatred? A return to the Latin Mass? Subjection to Rome? No. Foremost, Laud endeavored to enforce the use of the King James Bible and the Book of Common Prayer, so that throughout the realm there was truly "Common Prayer." Yes, he wanted the communion table placed "altar-wise" and he wanted reverence and uniformity in worship--he wanted the canons of 1604 upheld and put into effect and the Prayer Book followed. Imagine someone running into a modern service of the Holy Communion or Morning Prayer at the local Anglican parish and throwing excrement at the priest (because he was wearing a surplice) and tearing up the Prayer Books and Bibles all the while yelling "anti-Christ." Imagine ministers never celebrating the Eucharist (for decades) because they believed there was not one among the parish worthy to receive it? If you were the head bishop of the realm, what would you have done? Laud, at his execution, prayed for his executioners and expressed his belief that in all he had done he was only trying to defend the Church of England, protestant and reformed.

Cranmer died to defend the Catholic Faith without Roman additions. Laud died to defend the Protestant Church of England, rightly reformed to conform to the ancient Church, not wishing to see its faith and worship destroyed. I see them both as martyrs for the Anglican Church.

As C.B. Moss pointed out, the opposite of Catholic is not Protestant, but heretic. The opposite of Protestant is not Catholic, but Roman. Anglicanism: "Protestant and Reformed according to the principles of the ancient Catholic Church." As Anglicans, we should proudly proclaim the fullness of our heritage.

Prayer on this Feast:
Keep us, O Lord, constant in faith and zealous in witness, after The examples of thy servants Hugh Latimer, Nicholas Ridley, and Thomas Cranmer; that we may live in thy fear, die in thy favor, and rest in thy peace; for the sake of Jesus Christ thy Son our Lord, who liveth and reigneth with thee and the Holy Spirit, one God, now and for ever. Amen.
Posted by Rev. Dr. Hassert at 2:49 PM

A good post. I find it interesting as an outsider (Byzantine Orthodox Catholic) that I can't disagree with too much from a Byzantine perspective. How-ever,(you KNEW this was coming)every time I see the word 'reformed', I think Calvin/Reformed/Presbyterian and worse of all, John Knox. You should find a different word.
Thanks again for the post as I am learning a great deal about this strange creature, Anglicanism.

I know many Anglican don't like the word "reformed" either, and the Calvinist "Reformed" won't apply it to Anglicans nor Lutherans (for we are not "fully and rightly reformed" according to their perspective). Ah, the beauty and pains of using language. When I use the word ("reformed" or "protestant") I try and use word as a 16th or 17th century Anglican would, which makes things even more confusing, because they would say things like "Protestant Catholic" or "Reformed Catholic."

Thanks for your continued comments, Matthew.

I don't think it helps when those Anglicans of a 'Reformed' perspective (in the Geneva/puritan/presbyterian sense) try to deny the birthright of those Anglican of a more 'Catholic' bent (whether English or Roman use). I myself am a 5-point Calvinist, but I found it extremely distressing when I met a well known English evangelical preacher this past summer, and he described a rather "low-church", evangelical parish in the U.S. as trying to reinstitute the sacrifice of the mass. The amount of distrust and theological paranoia on this end of the churchmanship spectrum is embarassing for those of us very 'Reformed' Anglicans who value the contributions of Cosin, Andrewes, Herbert etc. to the Anglican way. And it is unedifying for our brethren who lean in a more "Anglo-catholic" direction.

American Anglican evangelicals seem to lack the spirit of hostility that pervades English evangelicalism. Can we preserve this good-will as we (hopefully) move towards a union of the Continuing churches, African church plants, AMiA and the Anglican Communion Network? I hope so.

This Feast Day and your thoughts about it certainly contextualize our Communion's current unpleasantness.

As distressing as heresy and schism are, I rejoice in receiving the Eucharist every week, hearing the Scriptures read and preached, praying the prayers of the Church, singing Her Hymns and partaking of the fellowship of the saints at my local parish.

I am moved to tears at the remembrance of such a time in our Communion's history that people would throw excrement at the priest and seek to destroy both Bible and Prayer Book.

Often, one's Calendar is a give away. IMHO, Anglicans that cannot see that both Cranmer and Laud, warts and all, both should be commemorated are, at best, wounded Anglicans.

As for the term "reformed," I have noted a difference betweem small-r, big-c reformed Cathoics and capital-R, small-c, Reformed cathoics. Because capitl-r Reformed has become synonymous with the theological school of Calvin, the later often comprises Prayer-Book Presbydestinarianism, not Anglicansism. Hence, I stive to always use a lower case "r," when describing Anglicanism proper.

"Anglicans that cannot see that both Cranmer and Laud, warts and all, both should be commemorated are, at best, wounded Anglicans."

As clear as could be stated. Amen to that.