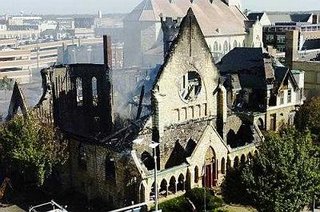 (Note: This church was mentioned in a previous blog article. This is a horrible loss. Even though the building was no longer being used as a place of worship, almost 20 years of fond memories, culminating in my marriage at this beautiful gothic church, now no longer have a focus. I know this sounds rather self-centered, but I've spoken with other former members of the church and they feel similarly.

I joined the Episcopal Church in 1987 through this parish and was confirmed there. I remember serving as a layreader, assisting the rector on Good Friday, and the many beautiful Midnight Masses on Christmas Eve. Soon even the ruins pictured above will be gone).

By Jeff LongTribune staff reporterOctober 8, 2006, 4:42 PM CDTA fire in Joliet destroyed a historic church building early Sunday, forcing several people to flee, but no one was injured, according to the fire chief.Firefighters arrived at the former Christ Episcopal Church, 73 W. Van Buren St., at about 5:15 a.m. Sunday, said Joliet Fire Chief Larry Mores.Mores said five people escaped the former rectory. But Tony Menza, who had been living in the former church's rectory, said six people were in the house-three rent-paying tenants and three others. All escaped without injury."My girlfriend heard the crackling of the roof being on fire," said Menza. "She saw the fire and yelled for me to get up. I saw the orange flashing outside my window and knew it was bad."Menza said the building's owner wants to convert the church, which was closed in 2003, into a nightclub. The owner could not be reached Sunday."Definitely a total loss," Mores said of the building. "The rectory portion does still resemble some sort of building.Mores said it's too early to tell whether the fire is suspicious. Joliet police, city and regional fire investigators and the state fire marshal's office are investigating.When crews arrived, Mores said, flames were already visible coming from the church's roof and the sanctuary area."It's been a long time since we've seen a fire of this magnitude," Mores said. "There were fireballs going everywhere."But firefighters kept adjacent buildings from catching fire and Mores praised their efforts."The crews did an excellent job containing the fire," he said.The church is the second oldest Episcopal Parish in the metropolitan Chicago area, according to the Landmark Illinois' website.
Posted by Rev. Dr. Hassert at 8:09 PM

Condolences on this loss and your loss. it must have been a beautiful temple at on time
and still could have been.
I find it hateful that ECUSA would rather close a church(not necessarily this one)and let it rot or have them turned into various other "things" instead of selling them to 'Continuing Anglicans' or even Old Catholics or Western Rite Orthodox congregations.
It appears they (ECUSA) is going to have many more empty parish churches to deal with.

Oh yes Father, tried to find a Saint Andrew's Anglican Church in the Chicago area and no luck. How about posting something on 'YOUR' parish?

I've tried to remain a bit anonymous in the blogosphere in order to speak in a broadly "pan-Anglican" voice. St. Andrew's is an REC parish in Tinley Park, Illinois. Since it is the only REC-APA parish in "Chicagoland" I used this as the landmark city to orient the reader.

Our phone book advertisement is "St. Andrew's Anglican Church, a Reformed Episcopal Parish" while our web page simply says "St. Andrew's." I'm working with our webmaster to add some photos of the rector, myself, one of our youth leaders, and some of the laity. Right now there are just photos of the stained glass. When we have some better stuff on the site I'll provide a link (you can find it by searching google for St. Andrew's Reformed Episcopal, but I won't be featuring the web page until we update it).

I lived in there when this happened it was horrible...tony menza