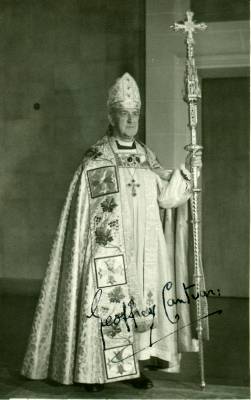 As everyone well knows, there is a crisis in Anglicanism going on outside of the traditional continuing Churches (and within some of them as well); as the “official” and largely heterodox Episcopal church crumbles the faithful Anglicans in this body are left with the question “Where should I go?” As a traditional Anglican priest I would suggest seeking out a parish of one of the faithful Anglican bodies in the United States (such as the Anglican Province of America, the Anglican Province of Christ the King, the Reformed Episcopal Church, the United Episcopal Church, the Anglican Catholic Church, etc--this is by no means an exhaustive list, but I have worshipped in these communities). In these bodies, I believe, the Catholic Faith as described by Fisher is held, taught, and worshipped in.

Others may seek the comfort and security of Rome—indeed, many have done so, and have entered into the Roman Communion with the same fanfare as Cardinal Newman. However, when they arrive they often quickly start throwing stones—in love, they say, because they fear for our immortal souls—back towards orthodox and catholic Anglicans because we are “not in communion with the Holy See.” This necessitates that the bishops, presbyters, deacons and laity of classical Anglicanism have a ready response. Too often we do not, and the strength of orthodox Anglicanism is sapped.

To the clergy and laity I suggest two short texts that will provide good foundational information for answering the historical and theological claims of former-Anglicans-turned-Roman. The first is the late Father Louis Tarsitano’s An Outline of an Anglican Life. It has been endorsed by and used in the Anglican Church in America, the Anglican Province of America, and the Reformed Episcopal Church. This text is very good for covering basic Anglican doctrine and practice and can be purchased from the publication society of the Reformed Episcopal Church.

The other text I’d recommend is Archbishop Mark Haverland’s Anglican Catholic Faith and Practice (available from the Anglican Parishes Association via the link in the post “What is the Catholic Church”); this book contains a wealth of historical information dealing with the ecumenical councils, the papal claims, and Marian doctrines (which are “necessary to salvation” in the Roman Communion). However, this text is a bit lighter on basic doctrine than Father Tarsitano’s text, and some of it is oriented directly toward the Anglican Catholic Church. Both books, when taken together will provide the educated cleric or layman with the tools to respond to demonstrably false historical and theological claims made by Roman Catholic proselytizers.

To paraphrase the Rev'd Dr. C.B. Moss, the Anglican claims are minimal: we claim to be Christians in the apostolic tradition, teaching apostolic doctrine, and worshipping according to apostolic patterns. The Roman claims are a bit more bold: they claim to be The One True Church, having universal jurisdiction over all Christians, and having an infallibility (uniquely held by her head Bishop) that allows new doctrines to be added to the faith of the undivided Church. It is the duty of the one making the greater claims to prove her case. As Anglicans, we need to know what the claims are and be ready and able to respond.
Posted by Rev. Dr. Hassert at 11:40 AM

I think we can say that throwing stones at your former tradition is a common phenomenon among converts ( Heaven knows how I relished taking pot-shots at the evangelical Dispensationalism of my misspent youth ).

Nevertheless, when vultures spot a disheveled, wounded beast lumbering by, they do tend to circle. 'Tis nothing to fret about; our over-zealous Roman and EO brethren have been licking their chops at ECUSA's imminent demise for years now. Let them salivate, I say. The resiliency of the Anglican Way-more than a match surely for the chaos of institutional shipwreck-will leave them astonished.

Both books, incidentally, are superb-Tarsitano's especially. His death was a tremendous loss to Anglicanism.

I have never met Orthodox Clergy licking their chops at the demise of the ECUSA. Most priest I have talked with lament how bad it makes them look because when people hear "Gay Bishop" that often don't know that a ECUSA Bishop is not part of the same Church as an Orthodox Bishop.

I think a very muted if not unstated claim made by an element of Anglicans (especially reformed anglicans) is that the Orthodox church is in error, that all churches are, that no church can lay claim to being the pillar and ground of truth but rather the church is varying truths with coequal validity.

I personally have never met an Orthodox priest who has anger or ill will towards Anglicans. The converts to Rome do, however, and make no bones about expressing that hostility openly and often.

As to the muted claim that Orthodoxy is in error--this is a hard statement to either prove or disprove. All of the Anglican bodies I know of endorse the Seven Councils, so on those we agree. There have been times when various national churches have erred, and I think the Article (in the 39) on churches being in error speaks to that fact. Pinning down "the Orthodox position" on many issues beyond the 7 Councils will often result in only further confusion. The Orthodox Church in Greece decided in 2004 to "ordain" women to the diaconate for ministry in convents--this is not a widely proclaimed fact (and based on the old Byzantine rite to be used it is unclear if these are lay or ordained--there is a laying on of hands and the language is nearly identical to the male diaconate). A pan-Orthodox congress in 1988 supported this, and a book arguing for it was endorsed by the Ecumenical Patriarch. Is this error? Will it impair the salvation of souls?

The Greek Orthodox Church in the US has issued statements telling the Eastern Rite faithful not to receive communion with Western Orthodox and telling Eastern Rite priests not to celebrate with them. What is this teaching about the Western Rite?

I think the Anglican point is that all churches have made errors in doctrine (how long was St. Athanasius in excile?; how many Popes were heretics?) and that the ultimate rule of truth is that which has been believed always and everywhere in Christendom--hence the constant appeal to the Scriptures and what the Fathers taught from Scripture.

As an Anglican divine once stated "The Church to teach, the Scriptures to prove." If what we teach openly contradicts the revelation in Scripture, can we really claim "catholicity," or even "Christianity" any longer?