Christus Rex--Reflections on the image of Christ the King 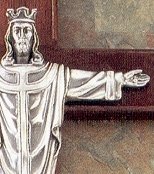 One of the most striking and meaningful images to me in Christian art has been the Christus Rex, Christ the King "reigning from the Tree." This is the image that most frequently greets me when I've visited Lutheran parishes.

Recently I came across a posting on The Patristic Anglican which contained this excellent quote from Collin Morris in The Oxford Illustrated History of Christianity in regards to the development of the traditional (corpus in repose) crucifix we usually think of as being a mark of "Catholicism." Morris observes:

"The crucifix was becoming a prominent feature of church decoration, replacing the Christ in majesty which dominated early buildings, and it was a crucifix in a new style. The Lord was no longer shown upright and majestic, clothed in purple and reigning from the tree: now, a dying man was offered for the loyalty and compassion of the beholders. . . "

I commented once to a priest who had a Christus Rex upon the altar how much I liked that particular cross. To my surprise he told me how much he disliked it: To him it was an image of the living Christ re-crucified, brought back to the cross following the resurrection and sacrificed again. This comment resulted in my spending some time researching the theology and history of the Christus Rex. My findings were those that Morris expresses above: The Christus Rex is the more ancient emphasis, and the dead Christ is a more recent development. Indeed, is it--the image of the dead Christ--the most proper image to have on the altar when celebrating the Holy Thanksgiving of not only Christ's sacrifice, but of His resurrection, glorious ascension, and His coming again? Here are some comments on the image and its place in Western iconography from various sources:

"A CROSS was sometimes set on the Holy Table before the Reformation; but it was by no means the rule, though nowadays many seem to consider it a necessity. In cases where a painting forms the altarpiece it is often better dispensed with (even where there is room for a small cross below the picture), especially in the case of minor altars; and the appropriateness of using a cross where the Crucifixion forms part of the altarpiece is more than questionable. Under no circumstances should a cross be placed on the altar when it would stand in front of a picture or of the figures of a sculptured reredos, The idea that an altar is incomplete (or ‘Protestant’) without a cross needs to be strenuously combated. Indeed, although altar crosses and crucifixes are certainly included under the rubric, there is much to be said both from the ceremonial and from the theological point of view against their use on the altar. The proper place for a representation of the crucified Redeemer is the Roodscreen. In any case the primitive crucifix, in which our Lord is represented in an attitude of benediction and majesty, is more seemly than the twisted and distorted figure one often sees."

Similarly, Canon Vernon Staley, the Anglo-Catholic scholar, wrote in his 1904 Ceremonial of the English Church (p 113-115):

"It is not well to regard the Eucharist as commemorative solely of the death and passion of our Lord, and to forget that it is also the memorial of His mightly resurrection and glorious ascension. In thus emphasizing His humiliation at the expense of His exhaltation some have been led to associate the crucifix with the altar rather than the cross of glory. In connection with this, it may be pointed out that our Lord in glory is a much more suitable subject. . .over the altar, than our Lord crucified."

The question remains, why were Christus Rex images (or variations of this image) prevalent in the ancient Church? Bishop of Oxford Richard Harries addresses this question in his book The Passion in Art. He comments first on the first depiction of the crucifixion (about 400 A.D.):

". . .This is no defeated Christ: his eyes are open and head upright, and his arms stretch firmly outwards. He looks boldly to the front, not so much constrained by the cross, as superimposed upon it. The contrast is deliberately made with Judas hanging on the tree, the thirty pieces of silver spilled onto the ground at his feet. . .Judas is dead and defeated, but Christ is alive with the life of triumphant love. . . .Over. . .anger and sadness and death the love of God wins through. Christ reigns from the tree" (p 13).

"In the earliest depictions of the Passion that have surivived, Christ is shown alive on the Cross. This was true both in the West and in the East. . . .The major theological issue that concerned the Church from the fourth to the eighth centuries. . .was the person of Christ. The Church came to assert that he is truly God and truly human, yet remains one undivided person. If this is the case then how should Christ be depicted on the Cross? If he was simply shown dead, or in the tomb, people might wonder what happened to his divinity. So it would seem that from the fourth to the end of the seventh centuries artists chose to avoid the controversial questions by not showing him dead on the Cross at all. Christ is shown, as we have seen, with arms outstretched, head upright and eyes open, very much alive. This had the doctrinal adavantage of making it clear that Jesus had indeed been crucified as a human being, for there he was on the Cross. But his open eyes could be interpreted as the logos, the eternal word of God. . .being very much alive" (p 29).
Posted by Rev. Dr. Hassert at 9:23 PM