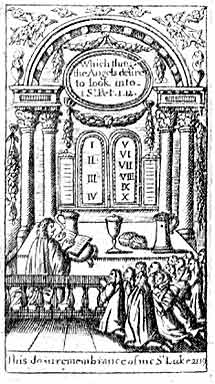 The question that continues to vex Anglicanism (perhaps since the time of the Reformation) is whether she is "properly Catholic or properly Protestant?" Some will answer that she must simply be Protestant, because she is separated from Rome, and only those in union with Rome can be called or properly labeled Catholic (and indeed this is the Roman position). However, why then did the Church of England continue the ministry of Bishops, Priests, and Deacons (using an Ordinal that simply reverted to more ancient language in the conferring of Holy Orders)? Why did she continue with the Feasts and Fasts of the Church? Why did her Prayer Book maintain the Sacrament of the Holy Communion as the standard form of worship on the Lord's Day (and maintain that it could only be celebrated by priests of the Church)? Why did she continually appeal to antiquity for her decisions? Why did her theologians and archbishops continue to maintain the Catholicity of the Church of England after her final separation from Rome (with Elizabeth I insisting that she be counted as a Catholic monarch and her bishops be seated with the other bishops of the Church when invited to the Council of Trent, with King Charles I and Archbishop Laud suffering martyrdom from Puritans due in no small part for asserting the Catholic nature of the Church of England)?

That Anglicanism is wholly "protestant" is an extremely simplistic assertion and hinges on the meaning of the term itself. However, so too is the contention among some that the term "protestant" doesn't apply to Anglicanism in even the slightest sense. Asked if we Anglicans are Protestant or Catholic, some will say: "We are Catholic, but not Roman--we are not Protestants." This is simplistic and historically erroneous, and any layperson with an interest in reading would soon find very Catholic sounding Churchmen of the 16th and 17th centuries (such as Bishops Cosin and Andrewes) embracing the term Protestant. (But my rector said it wasn't so!) What to make of it then?

If we are using today's terminology perhaps "Protestant" isn't wholly accurate or inaccurate, for nowadays Protestant does simply mean anything that isn't "Roman" (including Baptists, Presbyterians, Seventh-Day Adventists, etc., etc.) but neither would be the use of the term "Catholic," for in today's use of the term this means Roman. Many Anglicans are happy to explain the historic and correct use of the term "Catholic" but do not wish to do so with the term "Protestant." This is a selective use of logic--if the historic usage of one term is explained the other term ought to be likewise explained. "You see, you misunderstand the term Catholic dear friend. . ." The follow up should be they also misunderstand the historic use of the term Protestant. However, it needs to be noted that many Anglicans today have become Latter-Day Puritans, attempting to sweep the Anglican Church of any hint of "Romanism" (which may mean choirs robed in surplices, a priest wearing a coloured stole, or keeping the 1662 Prayer Book calendar of saints days): Many from this group do indeed wish to deny any "Catholic" character or nature existing within Anglicanism. This also is to deny history and the faith enshrined in the 1662 Book of Common Prayer.
How do the Anglican divines use the terms? It is shocking to many that the terms are used together: Protestant Catholic, Reformed Catholic, etc. Again, as I say so often quoting Bishop Cosin: "Protestant and Reformed according to the principles of the ancient Catholic Church." What does this mean? Well, it should be clear to most. The English Reformation was built upon removing erroneous beliefs and practices (the Mass not in the vernacular, the Bible not in the vernacular, Purgatory, indulgences, transubstantiation, doctrines about the excess merits of the saints, etc) with an appeal to what was accepted in the ancient and undivided Church (with Bishop Jewel appealing to the Eastern Church as an example of a Church separate from Rome yet clearly orthodox--indeed, Jewel urged Rome to return to the pattern of the Eastern Church!). All such late additions to the practice and belief of the Church needed to be stripped away if the faith preserved was to be truly Catholic--reformation was needed, and the Church of England protested against the errors of the Roman Church.
To put it more concisely: "At the Reformation the Church of England became protestant in order to become more truly and perfectly Catholic." William Van Mildert, Bishop of Durham 1826-36.
Let me turn to the good Father C.B. Moss for a fuller explanation (from Answer Me This):

"Remember, 'Catholic' means universal. Strictly speaking, only those doctrines and practices are Catholic which have always been believed and used in all parts of the Church. More loosely, the word is applied to practices and traditions (such as the observance of Christmas Day or the use of special dress by the clergy) which have a long continuous history and are universally accepted, even though they do not go back to apostolic times. The word also implies 'orthodoxy,' holding the right faith and worshiping God in the right manner as required by the Church."
In answer to the question: Is the Anglican Church Catholic or Protestant? Moss replies
"Both; it is Catholic positively and Protestant negatively. It is Catholic in its essential nature because it maintains the Catholic and apostolic faith and order. It is Protestant, in the old sense (emphasis added), negatively because it rejects the papal claims to supremacy, infallibility, and universal jurisdiction, and the decrees of the Councils of Trent and the Vatican."
When one is confused as to the use of these terms, they ought to be clearly explained. Some will argue (as Moss actually does) that the term Protestant has changed so much that we should omit its use all together (many Lutherans argue likewise, in that the old use of the term Protestant only referred to Anglicans, Lutherans, and Presbyterians; now that it refers so loosely to almost anyone not Roman Catholic it has become meaningless). However, the same could be said of the term "Catholic," since almost everyone means Roman when they say "Catholic" in the United States: Let's just stop using the word since it is so easily misunderstood. In my opinion we should follow the language of the Anglican divines, using both terms correctly and explaining the meaning in a clear manner to avoid confusion.

Is Anglicanism Protestant or Catholic? Ideally--when Anglicanism is practised according to the Prayer Book and the Catholic Faith enshrined in the Creeds--it is both, in the best sense of both terms.
Posted by Rev. Dr. Hassert at 10:36 PM