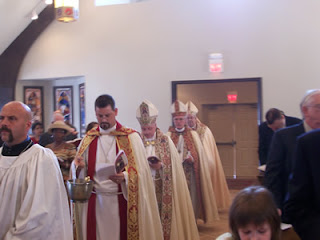 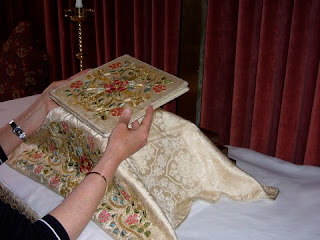 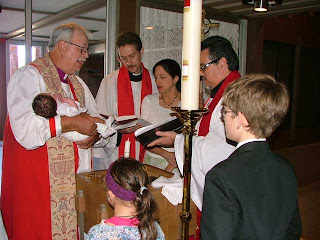 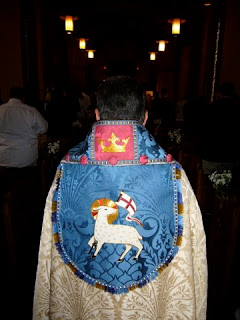 I love looking over the web pages of various churches to get a feel of what is going on in the different parishes. In the past I've done small profiles of parish churches in the APA, REC, ACA, APCK, etc., that I've been to or am familiar with from conversations with the clergy (not meaning to leave some out, but I only do profiles of traditional 1662 or 1928 Prayer Book parishes of the type that would list themselves in the Prayer Book Society publications). Below is an assorted grab bag of photos, culled from the web, of parish life within the Reformed Episcopal Church (in no particular order without labels). The "iconography" and content of the picture should be enough to 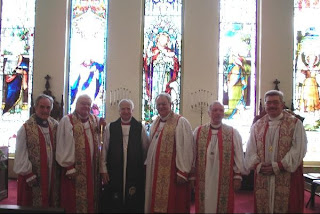 tell you what is going on. 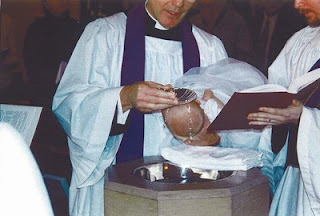 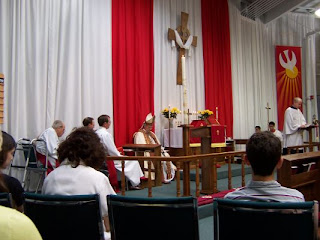 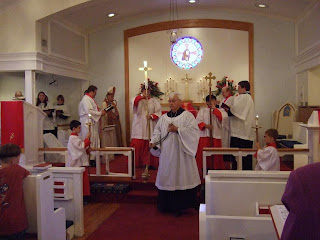 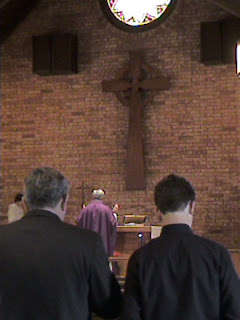 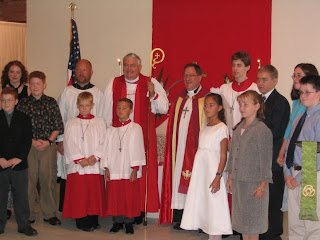 Where are the mitres?

I thought the REC Bishops were now wearing them?

They are--it just depends where they go. When I was in the Anglican Church in America it was the same for ++Falk. On some visits to some parishes he would wear cope and mitre and at others he would wear rochet and chimere.

P.S. I added a couple of mitre pictures per your comment.

It isn't the miters or lack of them which shocks me. It is the number of pictures in which the clergy seem entirely unsure of whether they are Anglicans or not. An enforced reading of the Alcuin Club's Directory of Ceremonial would seem to be in order. At least it would help.

Well, we've been through this same issue before in other forums. While many of us would like to see every parish abide by Dearmer's Handbook or Staley's Ceremonial, there is a widely accepted range of vesture in Anglicanism going back to Elizabeth and Charles. As long as I enter a parish and see a priest dressed like a priest (surplice and stole or alb and chasuble), and a bishop dressed like a bishop (cope and mitre or rochet and chimere), and a Prayer Book of the classical line being used for the service (1549-1962) I'm quite happy.

Your comment that the differences in dress make lead one to believe that the clergy are "unsure of whether they are Anglicans or not" is uncharitable.

May I ask you why you left the ACA?
I did just the opposite.

Very good. I left the REC for a more Anglo-Catholic flavor and that lead me to the ACA. Lot of good guys in both camps though.

It also depends a bit (as always) on the geographic location and the individual parish. Most of the ACA parishes out east were closer to the REC diocese of Mid-America (or vice versa, this diocese is the Canterbury Cap belt of the REC--more chasubles and incense), while the REC out east is, historically, more "low church" or evangelical (as was PECUSA in general, more surplices and stoles and a few gowns and stoles as well). The REC in the southeast incorporated many African-American PECUSA folk who were treated badly (denied black priests or bishops), so the parishes in that part of the country have a slightly different ethos, more gospel music, etc (and better preaching, from what I've seen).

Yes, on the east coast, the REC is VERY low Church. Most that I have seen are the proverbial "Presbyterians with a prayerbook" but they do seem to be slowly moving to a more classical Anglican position. Certain vestments are still not allowed to be worn or are just chosen not to be worn.....yet even that i think is beginning to change. You will hear more RC Sproul than Hooker and many Reformed books than Anglican but time will, Lord willing, change all that.
For me....holding to a sacramental view of things put me clearly in a different camp and so for conscience sake I needed to move to a like minded jurisdiction. I believe in more than 2 sacraments but the 2 are the only ones taught at the REC Seminary. Well...all things considered, I think they are changing for the best and like everything else it takes time.