The Church of the Holy Communion 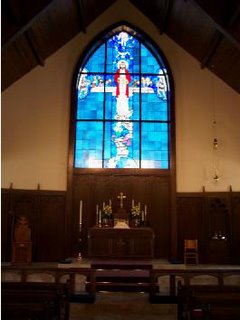 A cathedral parish of the Reformed Episcopal Church

From the parish web page:

The worship of CHC (Church of the Holy Communion) follows the historic 1928 Book of Common Prayer, produced originally in 1549 by the famous English Reformer and Archbishop Thomas Cranmer. It is scriptural with approximately 85% of its content being taken directly from the Bible. It is also more than a sixteenth-century document.

To compile this liturgical masterpiece Cranmer edited the medieval mass, itself rooted in the ancient liturgies of the Church of Ephesus (1st Century) and the Sarum Rite (10th century). The 1928 BCP (Book of Common Prayer) more closely approximates the original 1549 version as well as the 1662 edition, still the official prayer book of the Church of England and used by the majority of the 80 million member worldwide Anglican Communion.

We worship in a truly common prayer tradition.The two central services of the prayer book offered weekly at CHC are founded upon the spiritual practices of the Early Church described as continuing steadfastly in the Apostles' doctrine and fellowship, and in breaking of bread, and in prayers (Acts 2:42). The breaking of bread is the service of Holy Communion. Early Christians also worshipped with literally, the prayers, set prayers dating back to the Psalter and the synagogue. This service became the Daily Office, traditionally known as Morning and Evening Prayer in the prayer book. A sermon is given at both services: Holy Communion at 9:00am and Morning Prayer at 11:15am.
Posted by Rev. Dr. Hassert at 8:11 PM

I had the privilege of worshipping at Church of the Holy Communion shortly after the construction of its beautiful new facility. A small group of REC committee members met one morning in the side chapel for the '28 rite Eucharist, celebrated by Bp. Sutton. Dr. Hershbereger did a splendid job on the pipe organ leading the people in the hymns and canticles, and, among that morning's communicants were Bps Grote and Morse and Bp. Charles Dorrington of the Canadian church. Very nice.

It looks like a beautiful new church building. As with St. Barnabas, the Church of the Holy Communion demonstrates that the Prayer Book tradition of Anglicanism is influencing new parishes in the way they set about building new structures. Bishop Sutton's parish is well appointed for the Eucharist of the 1928 Prayer Book. Beautiful high altar, credence table, etc.

And, as usual with the REC, they get it backwards. Morning Prayer is supposed to precede the service of Holy Communion and be - as the collect expresses it - the beginning of this dayrather than a service near noon. There is also no rubrical or other provision of preaching at such a service.
But what can you expect of a denomination which began in the resentment of Bishop Cummings for not being allowed to persecute the clergy of the diocese of which he was suffragan bishop because they were beginning a return to practises authorized by the rubrics 0f 1662.

Your comment is partially correct, even if your disposition is uncharitable and your knowledge of Anglican history a tad blurry, lacking the objectivity that the members of the Anglo-Catholic Clerical Union gained a few decades after the Baptismal controversy. Wrong action can be claimed on both sides, and neither side had the theology on their side as much as they believed.

We can pray that all parishes using the Book of Common Prayer would return to the ideal set forth by Cranmer, starting the day with Morning Prayer culminating in the Holy Eucharist.

Of course, Cranmer's ideal was DAILY, public Mattins and Eevensong for everyome, with the addition of a Parish Communion on Sunday. And, unfortunately, no traditonal Anglican jurisdiction has met this ideal for decades. Occassionaly, a Cathedral may be able to pull it off, but even that is rare.

The REC is no better of worse than most in obtaining to Cranmer's ideal. And, also, Cummins's resentments don't strike me as particular worse or better than those of numerous other historical leaders of various types of churchmanship. To the contrary, IMHO, Bishops Cummins and Muhlenburg had some very good points of rebuttal to the extremes of the Victorian Anglo-Catholics in their day. (Indeed, I don't think that Acquinas even advocated the real, local presense of Christ IN the eucharistic elements themselves.)

Hey, "Bishop" Poteet -- who consecrated you? And why do you, who profess to be an expert on all things Anglican, serve as "rector" of an "independent" Anglican church? How do you justify that historically?

Just came across this blog..I must say, it is great to hear that the BCP is being used! It would be a wonderful day when all Independent continuing Anglicans can come together in Brotherhood, whether high or low Church....
Google Independent Anglican Church and we can find hundreds of listings..imagine if we could all combine! What a dent in the schismatic Anglican Communion we would make!
Here ends my thoughts for today...
Keep up the great work!

A broad Church Anglican, I came across your blog by accident. I am just delighted to hear of churches using the BCP (in your case the 1929, in ours 1662). Before retirement, in my parish Morning Prayer and (shortened) Holy Communion on two Sundays a month was the most popular service! On other Sundays we had Merbecke's Choral Communion, and always sung Evensong. In theory MP should come first, but I think providing both services, combined or as in your case separately, in either order is great. The vast majority of Anglicans in Australia are not confirmed or communicants, and churches that provide only the Holy Communion exclude them. Morning Prayer can be a great service for those on the fringe and I would recommend it for that purpose. (Unfortunately, in my extremely un-Anglican puritan Sydney Diocese, Communion is often down-graded - not celebrated every Sunday at our cathedral now, and any Anglican liturgy often relegated to the early 8am service, with the main service informal and dominated by long, long sermons!) Keep up your good work and your witness. God bless.