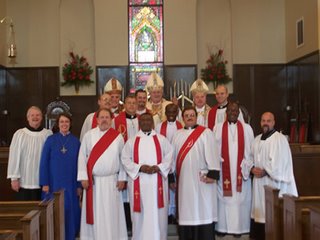 http://stmatthiasrec.org/index.html
From the web page:

St. Matthias held her first services on the Feast of Pentecost 1982 in Baytown, TX. Some of the founding members moved across the city of Houston and continued this ministry in Katy.
The Original Building They held services in homes and rented storefr 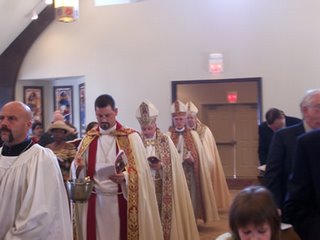 ont properties. After enduring many of the hardships that accompany a mission parish, the Lord provided a permanent location. In 1993, St. Matthias purchased a daycare facility just off Clay Rd. between Barker-Cypress and Fry Rds. With the help and service of the parishioners a daycare ministry was established. One of the rooms was also converted into the Chapel. In 1998 the Lord blessed us again and we were able to purchase the property directly adjacent to our building. We seized the opportunity with the hopes that we would someday erect a new sanctuary. That dream is now realized as we dedicated our new sanctuary in June 2006.

The Rt. Rev. Royal U. Grote, Jr. attended Reformed Episcopal Seminary in Philadelphia and was ordained in 1975. He served as a local parish priest in Pennsylvania and New Jersey until coming to Houston, TX in 1991. In 1984 he was consecrated Bishop and subsequently, the Reformed Episcopal Church called him to be a Missionary Bishop and to plant parishes in the Central and Western United States. He is now the Bishop Ordinary of the Diocese of Mid-America and oversees more than 40 parishes. When he is not traveling, Bishop Grote attends St. Matthias.

The Very Rev. Jason R. Grote was called as our Vicar in 2000. He received his theological training at the Reformed Episcopal Seminary in Philadelphia. There he received an award in homiletics (preaching). He is currently pursuing his Bachelor of Business Degree at the University of Houston Downtown. Once completed, the Reformed Episcopal Seminary will grant him his Master of Divinity degree. 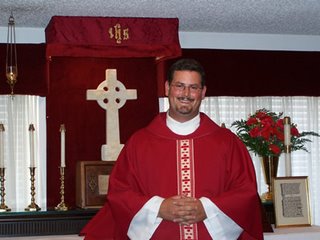 Fr. Jason served as a youth pastor in New Jersey and at one of our Houston area parishes - St. Thomas of Canterbury. He was ordained to the Presbyterate on September 14, 2000 and has been with St. Matthias ever since. In addition to serving as our Priest, he is also the treasurer for the Diocese of Mid-America, the webmaster for the Reformed Episcopal Church and works as a programmer for a web/database consulting firm.

Deaconess Annette Johnson assists Father Grote in the ministry of the Church, especially with women and children, under the supervision of the Bishop. She holds a degree in Education with certifications in Reading and Learning Disabilities. Her graduate work has been in the areas of Education Diagnostics and Theology. She was set apart as a Deaconess on the Feast of St. Bridgid (Bride), January 31, 1993.
Posted by Rev. Dr. Hassert at 4:32 PM