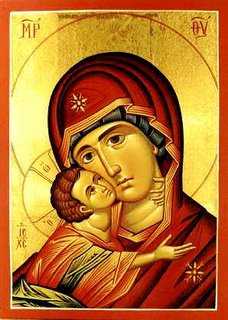 The Articles of Religion of the Church of England:

"II. Of the Word, or Son of God, which was made very man.

THE Son, which is the Word of the Father, begotten from everlasting of the Father, the very and eternal God, and of one substance with the Father, took man's nature in the womb of the blessed Virgin, of her substance: so that two whole and perfect natures, that is to say, the Godhead and manhood, were joined together in one person, never to be divided, whereof is one Christ, very God and very man, who truly suffered, was crucified, dead, and buried, to reconcile His Father to us, and to be a sacrifice, not only for original guilt, but also for all actual sins of men."

The piece below from Mascall outlines the orthodox realities of the Incarnation--Christ is fully God and fully man, not simply a deity taking on the flesh of man as though putting on a costume, but a real individuation of humanity. Christ took on not only the human body (soma) but a human body informed by a human nature, a human soul (soma psuchekon). He is not only co-substantial with God the Father, but co-substantial with humanity as well. He suffered, was crucified, died, and was buried. He died not only for original guilt, but also for actual sins. This eliminates any consideration of adoptionism, docetism, or gnosticism. Again, here we have nothing more than a summary of orthodox Christology; it goes beyond the Nicene Creed to some extent and clarifies the teaching.
Posted by Rev. Dr. Hassert at 4:47 PM

I have always thought, that given the their context, the Article's refence to "original guilt" must refer to the view of the Agustinian sysnthesis, which holds that all men are conceived with and share in origianl guilt. But, literally and grammtically, the Article does not require that inference.

As one Eastern Orthodox commentator on the Articles pointed out, the Article only says that Christ died for orginal guilt without attributing that guilt. This is significant, because in the consensus patri, before Latin-theology became sectarian, original guilt lies only with Adam and Eve, while its conseqeunces lie with all of us. (see e.g., J.N.D. Kelly)

and, upon further reflection on the Articles, however, I recall that St. Thomas had access to S. John of Damascus's "Eastern Summa." So, Cranmer probably had the "Exact Exposition of the Orthodox Faith" too. Thus, he may quite purposefully have glossed Article II to avoid the subtle Latin vs. Greek difference on the "original guilt" point.

Indeed, the more closely I read the articles without preconception, the more I notice deft and subtle phrasing that seems to avoid confronting pre-schism disputes but does explicitly or implicitly rule out those Medieval and Reformation developments have no grounding in either pre-schism Eastern or [and?]Western systematic theology, as expressed in John Damascene's "Exact Exposition" or "Peter Lomnbard's "Sentences" for seminal examples.

In short, I think the Articles are much more artfully drawn than usually protrayed by Medeival or Reformed partisans. A real genius lies behind them. An open door to reconcliation based on the communion held by the Pentarchy during the first millenium seems to have been a motiviating factor in the drafting. (Or maybe I'm reading in too much.)

We'll have more to speak about in this area when we get to Article IX, in that it seems to be the most Augustinian of the Articles.

Per your comments, the Articles really do seem to be Articles of unity and not division. One of the problems I have with the Book of Concord in Lutheranism is that when one goes from the Augsburg Confession (in which I find little to disagree with) to the commentary upon it which is held to be as authoritative as the confession itself I find interpretations that would exclude many--in some ways it reminds me of the Westminster Confession.

I agree 100 percent that the Articles are more a force for unity than for division. I am enjoying your posts on this--call this a Trackback on "Prydain".

Will, thanks for the mention on Prydain (as well as the commentary you posted there as well). I hope to have another post on the Articles during the next week.