Many people do not feel as though the Articles of Religion (the 39 Articles) are important for Anglicanism. Some will misinterpret them as being “anti-Catholic” and then reject them as such (they are not "anti-Catholic," but are definitely “anti-Roman,” but only in the sense that the writings of Hooker, Andrewes, Cosin, and Laud are anti-Roman—these writers are most definitely not “anti-Catholic” and indeed these men were students of the Articles and the theology of the Church Fathers); some will misinterpret them as “Calvinist” (when in reality the hyper-Calvinists were constantly seeking to supplant the Articles; the Articles are at the very least Pauline and at the very most Augustinian on those subjects that seem to perplex many); some will argue that what is good in the Articles is already stated in the doctrine as expressed in the Creeds, the Ordinal, and the Prayer Book—while there is much truth in this, many times the Prayer Book is supplanted by newer liturgies with little grounding in the historic Church of England. Therefore, I suggest that the Articles be taken seriously and studied, within their historical context and in the context of the theology of the Prayer Book and Anglican divines. Indeed, the Anglican divines cannot be studied without a knowledge of both the Prayer Book and the Articles (and why Puritans and Romanists opposed both). With that in mind, let us examine each of the 39 Articles, as they appear in the 1662 Book of Common Prayer. 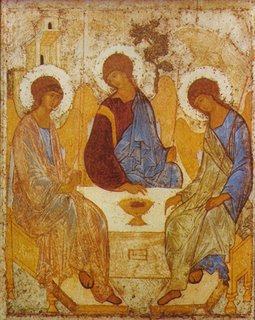 “I. Of Faith in the Holy Trinity.
There is but one living and true God, everlasting, without body, parts, or passions; of infinite power, wisdom, and goodness; the Maker, and Preserver of all things both visible and invisible. And in unity of this Godhead there be three Persons, of one substance, power, and eternity; the Father, the Son, and the Holy Ghost.”

Very little needs to be said as to the orthodoxy of this statement and its being in concord with the Scriptures as they were interpreted by the fathers of the undivided Church. There are indeed echoes of the Nicene Creed, and here the criticism could be made that this Article only restates that which is already accepted by ascent to the Creed.

However, with so much of "mainline" Christianity lapsing into heterodoxy concerning the very nature of the God we worship as Christians, a firm affirmation of Trinitarian orthodoxy within Anglicanism is a welcome thing. The primary placement of the doctrine of the Holy Trinity in the Articles emphasizes that the personal and triune nature of God is the foundation of Christian theology--without this doctrine none of the subsequent elements of the Christian faith have any coherence.
Posted by Rev. Dr. Hassert at 5:52 PM

What an interesting line of discussion. Of course, the first few Articles are consensus builders for certain. However, I hope we can make it to discuss the controversial ones such as Art. VI (How many books are to be considered "in the Bible" and how does this relate to Art. XXXV, and the Homilies' treatment of Apocrypha as Scripture.) Or, how about Art. XXV and the number of Sacraments? (Are there only Gospel Sacraments or are there additional, valid sacraments? If so, how do they relate to the Gospel Sacraments?

This could get exciting!

PS Thanks for posting about St. Timothy's Church. I shared the comments with our vestry and they were very encouraged. Thanks for highlighting their work.

Thanks for the positive comments. I think your remarks provide a bit of a prelude as to where I hope to go with this line of discussion. The Articles and their history do indeed need to be studied, especially by the clergy. How they were debated between the Puritans and Anglicans provides a great deal of historical theology for us to ponder.

I have posted my take on the Articles over at Patristic Anglican, wherein I argue that the Arcticles are sort of a "negative confession" distinguishing Anglicans from Continental Catholics and Reformers, but that the Articles don't go much farther than that.

Very true. I do think, however, especially in the circumstances that the traditional Anglicans now find themselves, that we need something like the Articles to keep those points of demarcation clear (that we are not Romans without the See of Rome nor are we Calvinists with a liturgical tendency).

Personally, for those who don't care for the Articles (the Anglo-Tridentines of which you write about on your blog) I'd appreciate their willingness to sign onto something like the 14 Theses of the Old Catholics--these at least provide the demarcation from the novelties of Rome.

Some would even balk at the 14 theses! I call these extreme examples Anglo-Papalist, as they have gone beyond Trent to the new dogmas -- they are simply like Henry VIII: Romand Catholics wanting less internal papal interference. Maybe the would sign the 6 articles?!